Login
0 Item
Advanced Search
Sign In
Create Account
Back on June 14, 2017, Mark Rosewater, in a characteristic burst of excessive energy and tenuously held back by an exasperated Nate Price, revealed that the long-anticipated third unset was not only happening, it was set to be released on December 8, 2017. Yes, after 11 years of waiting, we are finally returning to the world of Silver-bordered cards. Unstable will be gracing us with its presence in just a few short months and we will once again be able to sneak Cheatyfaces into play and present the vexing question of whether or not itâs worth it to take your pants off to prevent two points of damage from a Hurloon Wranglerâ.â.â.â Wait, whatâs that? The third Unset is being designed with a modern design sensibility and will have a cohesive creative identity? Huhâ.â.â.â Maybe we wonât be seeing the return of Denimwalk after all. (And thatâs probably for the best)

For anyone unfamiliar with the original two Unsets, Unglued and Unhinged took a bit of a cavalier approach to humor and silly design that was very indicative of the culture of the game at the time. One-off jokes and self-referential humor were abundant in those two sets, good for a couple of laughs before you take a step back and realize that the humor hasnât necessarily aged well. Of course, there are a couple of standout examples of cards with long shelf lives. Cheatyface is classic from Unhinged, while The Ultimate Nightmare of Wizards of the CoastÂ® Customer Service still rings as a particularly funny meta joke, and Ashnod's Coupon has resulted in many a drink being fetched by unwitting opponents. However, there was something lacking from those first two Unsets: A cohesive identity. What made all of these cards fit together besides how they bent the rules of what was possible in a game of black-bordered Magic? If a newer player looked back at the first two Unsets, would they get the meta humor? Would they still appreciate the sight gags or the surface level humor that plagues cards like City of Ass, Censorship, or Flaccify? I wonât overstate this, but a lot of those jokes wouldnât play as well now. Theyâre a little too scattered, too on the nose and disparate from one another. So, imagine my excitement when we got our first few glimpses at what Unstable has to offer us.

At San Diego Comic Con, Mark Rosewater dropped some information about the upcoming Unstable. Everyoneâs favorite small furry creatures will be making a return, Rosewater confirmed, with a non-legendary Squirrel lord and enough support to build a deck around the acorn-loving tribe. John Avon will once again be gracing us with Full-Art Basic Lands, though Rosewater notes that these basics will do something they were too afraid to do for Unhinged. âThey look amazing,â Rosewater claims. I have no trouble believing they will look amazing given their iconic predecessors.

Contraptions are making their way into the game! Along with Steamflogger Boss, being printed on the land sheet to retain its black border, Mark Rosewater finally found a way to bring us contraptionsâ.â.â.â just in silver-border rather than black. Iâve seen a number of complaints about contraptions being solved for silver-border, as if not being in black-border somehow delegitimizes their existence. Rosewater has confirmed in the past, on Blogatog, that a silver-border solution to contraptions was acceptable, and Iâm excited to see what he managed to come up with for the long-awaited mechanic that couldnât be done within the confines of the normal rules.

Maro also announced Unstable will have foil tokens. Thatâs right. Foil tokens! And not just for token producers in the set. Unstable will have tokens for tribes Maro has promised players will want to have. Iâm imagining foil Goblin tokens are probably on that list given what we know about the creative for the set (more on that in a second) but we could get any number of things. What an exciting prospect. As far as I can remember, the only previous example of a foil token is Marit Lage from From the Vault: Lore. Truly exciting.

With that stuff out of the way, letâs talk about the thing that has me the most excited for Unstable. Three words.

Unstable received the full creative team treatment, with concept artists and world-building, and the results Maro shared at SDCC have me hyped. Set in a steampunkish world of mad scientists, the set is built around five ally-colored factions.

With unique factions and the promise of modern design and development, Unstable certainly stands to set itself apart from the two Unsets that came before it; but, what does Maro mean by this? How do you quantify the effects of modern design on silver-border Magic? Well, I wouldnât have had an answer to this a week ago, but another recent announcement gave us a look at our first card from Unstable. Courtesy of the recently revealed Hascon exclusive promos, here is the Sword of Dungeons & Dragons:

Unlike the other two cards in the Hascon promo set, as quirky and Unset worthy as they seem, Sword of Dungeons & Dragons is confirmed to be in Unstable. This is it, our gateway into what Maro meant by modern design sensibilities in an Unset. Letâs dig in, shall we?

Equipped creature gets +2/+2 and has

protection from Rogues and from Clerics.

combat damage to a player, create a 4/4

So, I was honestly surprised when I saw this card for the first time. It is shockingly tame compared to some of the cards from the previous Unsets, and this is a Mythic! Thatâs right, weâll be getting Mythics this time around. Modern design sensibilities and all that. We donât even have any equipment from an Unset to compare this to, even though equipment was introduced in Mirrodin before Unhinged was released the next year. This is our first piece of Unset equipment, and the thing that stands out to me the most is how playable it is.

Iâm going to point this out, even though Iâm sure the enfranchised among you have already noticed what the Sword of Dungeons & Dragons is meant to evoke: The Sword cycle, five swords split between Mirrodin Block and Scars of Mirrodin Block that granted +2/+2, protection from an enemy color pair (

), and two generally powerful abilities associated with each color in its pair. Sword of Fire and Ice, affectionately referred to as S.O.F.I., is one of the most beloved equipment in the game, and Sword of Dungeons & Dragons is tapping into that nostalgia both mechanically and visually. 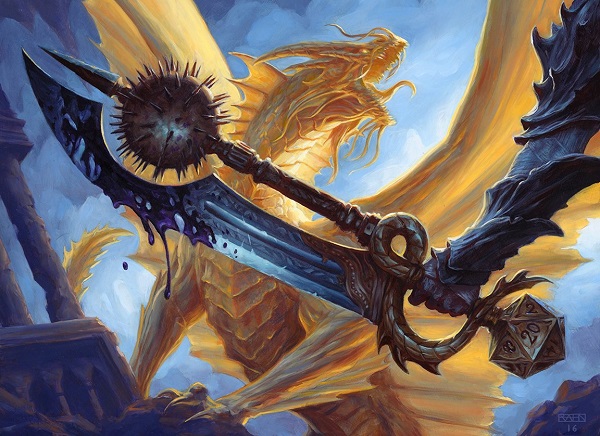 Itâs fantastic they commissioned Chris Rahn to do the art for this card, seeing as how he was responsible for the original versions of Sword of Body and Mind, Sword of Feast and Famine, and Sword of War and Peace, as well as the new art that graced Sword of Fire and Ice and Sword of Light and Shadow when they were reprinted in Modern Masters 2013. The style is consistent with the other five swords: a hand grasping the hilt of a blade, the blade made up of two separate halves representing the two forms of protection it grants. That formula is on full display on the latest Sword in the cycle, an armored hand firmly grasping a hilt shaped like a dragonâs tail, the pommel a d20 (the critical 20 facing the viewer), and a curved, poisoned blade accompanied by a rather ineffectively placed spiked mace. Protection from Rogues and Clerics indeed. The art even shows us the impressive result of getting a hit in with this sword, the massive Golden Dragon roaring in the background. If I didnât know any better, I wouldnât immediately assume this was art for an Unset card. It feels at home in the pages of a D&D book, one of the many fantastic magic items available for use in your campaign. The art for the Dragon token even has text from a D&D Monster Manual in the background! Thatâs a home-run in terms of flavor and art direction, and I can only hope the art for the rest of the set follows suit. If this is any indication that Unstable is generally moving away from the brand of silly art direction of the past and toward more subtle, ridiculous depictions, then Iâm a happy camper. I like subtlety. (I will point out that there are images from Maroâs panel at SDCC, but theyâre so low quality that I would rather wait to discuss them until higher resolution images are made available. Overall, though, I think the quality and consistency is up across the board for Unstable. The raccoon releasing squirrels from a trench coat is particularly entertaining.)

In past Unsets, there were plenty of cards that paid tribute to powerhouses (see Necro-Impotence), and this is definitely a good way to continue that tradition in a more timeless (and cross-promotional) way. Part of the appeal rests in the popularity of the source material (both the Sword cycle and Dungeons & Dragons as a game), but a large part of what appeals to me about this card rests in how it handles itself and stands on its own two feet as a silver-border design. So, letâs talk about the design. The card is good. Plain and simple, the card is actually, playably good. Like the swords itâs based on, Sword of D&D gives a sizable power/toughness boost for a cheap equip cost. The protection clause is definitely less protective than the other swords, but thatâs where we get some of the silliness and flavor coming in. Protection from Rogues and Clerics would be a bit too specific for black-border Magic nowadays, Baneslayer Angelâs Protection from Demons and Dragons clause notwithstanding. Then we move on to the combat damage trigger. Creating a 4/4 Dragon token upon dealing combat damage is definitely a black-border ability. Moonsilver Spear made a 4/4 Angel token whenever the equipped creature attacked, so thereâs precedent. Where the ability takes its silver-border turn is with the d20 clause.

Rolling dice has appeared on silver-bordered cards before (see Goblin Tutor), but a d20 has to be a first and is incredibly on-theme for D&D. The possibility of your attack being a critical hit and making another dragon token is such an amazing concept. It combines an already good ability, creating a token when you deal combat damage, with the possibility of an incredible moment in which you roll a natural 20 and get to do it all again. Thatâs something theyâre unwilling to do in black-border, much like the protection from Rogues and Clerics clause, because itâs too granular, too specific. But hot damn is it effective. Itâs the perfect combination of playability and resonant humor/flavor that I want from an Unset card. Iâm impressed, and hopeful. Hopeful that this foretells good things to come in the rest of the set. Not every card can be a home run, but if most of the cards in the set hit some of the same notes as Sword of Dungeons & Dragons, I predict Unstable will stand as the best Unset by a large margin. More Swords of Dungeons & Dragons, less City of Ass. Please. Iâm begging you, Maro.

So, our first peeks at Unstable has me hopeful. Let me summarize:

I predict Unstable will be the best of the bunch. Wellâ.â.â.â as much as you can predict the unstable.

See you next time,