She thinks for a while, reaches for her remaining lands, and then hesitates. Then she reaches for them again, and taps the rest.

"I'll sacrifice my Blood Pet for a total of four mana," she says.

"I'll cast a Dread Specter with that," Harriet says, playing the last card in her hand.

She glares at you. "That's not very nice."

You raise an eyebrow. "What's not very nice?" you ask.

"But I'm not doing anything at all," you say.

"No kidding," Harriet grumbles. "I haven't been able to get at you for the longest time. It's like you're drawing out this match instead of killing me properly."

Puzzled, you glance at your side of the table. As far as you're aware, you're in a solid position at the moment, but it's not like you have an overwhelming advantage.

"The worst part is that you've had that Tolsimir staring at me for most of this game," Harriet notes.

"What, you mean Tolsimir, Friend to Wolves?"

"It's from War of the Spark!" Harriet says. "It's not even supposed to be out yet!"

"Er... we are playing the Unabridged Cube here," you say slowly. "I don't ask how, but it's got one of each card ever printed. Even if they're from expansions that haven't been released."

"You're just taunting me now," Harriet says. "All I'm asking is that you end it already."

"You could just concede, you know."

Harriet suddenly gets very quiet. "I can't do that," she says. "My Razerunners might still stand a chance of killing you."

You sigh. If Harriet really wanted to lose this game, she wouldn't have stifled your Krosan Beast by having her Withered Wretch eat most of your graveyard. You get the worst opponents sometimes.

"Are you attacking?" you ask.

She gives you a look. "Do you think I'm attacking?"

"I'm sorry I asked. Okay, so you'll end your turn, and I'll take four damage from the Razerunners."

You untap your permanents and draw a card from your library, adding a Suture Priest to your hand. "Well... you're right about one thing, at least."

"The fact that we both want this game to be over and done with. What's your life total, again?"

It is the start of your first main phase. Defeat Harriet before the beginning of her next combat phase. 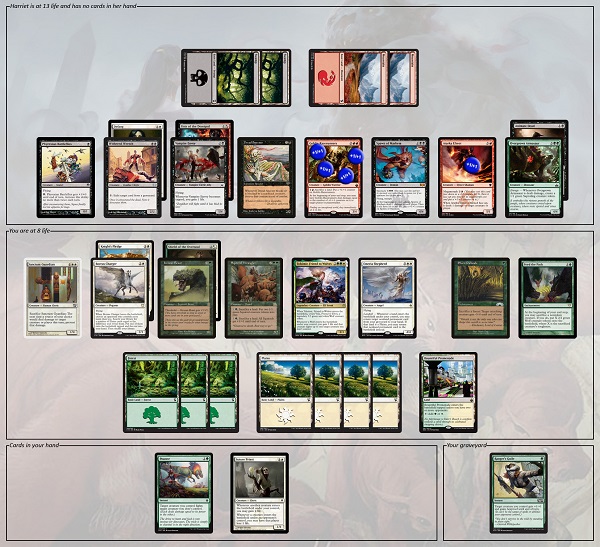 You have not yet played a land this turn. You still have a substantial number of cards remaining in your library, but you know neither the identities nor the order of those cards. You're sure you still have some Plains in there, though.

Harriet is at 13 life and has no cards in her hand. She has the following cards in play:

It looks like Sean will be out of town for a few weeks again! (No, he's not running with the wolves.) While the next few puzzle articles will still go up every Thursday as scheduled, their solutions will be placed on hold until Sean gets back.

Our submission dates still apply, so if you want your solution for a puzzle to be considered, you'll still have to send it in by its respective deadline. We'll update these puzzles as soon as possible once Sean returns to regular writing duties!

"Here's a puzzle where simple math tells you how to proceed," Greg Dreher writes. "Twenty life is a tall order, and Verne's board is solid. You have one reliable form of evasion - Traitor's Clutch - and only one creature that can possibly get big enough, the B-I-N-G-O hinted at from the title of this puzzle.

"That also means that we need to cast at minimum five spells," Addison Fox adds, "and to make matters worse, the ones we have at our disposal require some pretty expensive mana commitments. However, alternate casting costs don't change the converted mana costs of their spells, so we might be able to make Verne roll over."

What you need to do, then, is find as many discounts as possible to cast your most relevant spells. It turns out that your Avatar of Might is the key here - for as Addison writes, you can manipulate the board state to get the Avatar for a reduced cost:

This solution has one minor variant: You can also use Quagmire Druid to sacrifice your Greenwarden of Murasa instead, getting back a Slaughter Pact that you can then cast to off your Avatar of Might. This gets you a chip counter on B-I-N-G-O's '0' slot, but doesn't get further than that because you're not able to get either the '6' or the '4' slots without compromising your win.

"This was very fun," Michael Feldman notes. "It was especially cool to have every available converted mana cost from 0 to 8. Having all that possibility leads to some false paths whose status as red herrings are interestingly complicated by the obviousness that we won't need all nine chips... and in any case, don't have the mana to cast all that, even at reduced or flashback costs."

The bonus, of course, is that all this gives Verne another story to tell. "And victory was his name-o," Greg muses.