"I was expecting this Cube to give me more of a welcome," Octavia says, frowning. Or at least, you think she's frowning - it's hard to tell with her mask on.

"I guess it's having one of its bad days," you admit. "Having one of each card ever printed means that you get some bad card pools every now and then."

Although the Magic 2021 prerelease is officially on the table in other places, you arrived at your local game store to find that it wasn't happening this weekend. Considering that a lot of restrictions are still in effect - face masks and hand sanitizer still being a thing, after all - you weren't exactly surprised. A small Unabridged Cube draft is helping to take the edge off, though.

"Here's my untap," Octavia announces. "Now that that's finished, my Terra Stomper taps at the beginning of my upkeep because of your Narcolepsy."

"Nothing," Octavia says. "I just drew something interesting."

"It certainly looked more than interesting to me," you say.

"Your eyes are a dead giveaway."

Octavia laughs. "I should have gotten something that covers my face completely," she says.

"You're wearing a face mask that's made out of Italian silk," you point out. "I would be surprised if they used more of that material for something that's not going to see a lot of demand."

"And I didn't have that much of the fabric," she says.

You raise an eyebrow. "You sewed that yourself?" you ask.

"I had a lot of material to work with," Octavia says. "Mostly scarves and other accessories I got from old photo sessions."

"That implies you have more than one face mask," you say. "But then where... wait a minute."

"So the face masks being sold at the front counter are yours?"

Octavia shrugs. "I thought I'd do my part," she says. "And I had a lot of spare time while we were under restrictions, so..."

"One of my friends bought four of them over the last week. So far."

"He said something about sending them over to his family, so there's that."

"You can tell him that I have a second batch coming next week."

You raise an eyebrow again. "Just how many face masks did you make?"

"It was a long lockdown," Octavia admits. "Can we get back to the game now?"

"Oh, right," you say. "Sorry about that. I was just wondering about those masks for the longest time. I think you were about to play something good."

"I can just untap it on my next turn," you point out.

"You can untap anything on your next draw, and that Kraken is still your biggest creature," Octavia notes. "That leaves me seven more mana, and I'll use that to cast a Demon of Loathing."

"Yes, you're a genius and I've got the worst poker face in the world," Octavia laughs. "But now you have to figure out how to deal with it. It's your turn."

You shake your head as you untap your permanents. "Truth be told, I did miss this," you say.

"I thought you spent weeks playing something like this with your friends."

"This is different," you say, drawing your card for the turn. "And you're not playing against the same people every time."

"Wait," Octavia says. "Are you paying for your Kraken's triggered ability?"

You glance at the board. "Let's say 'no' for now. I think I might have something here." 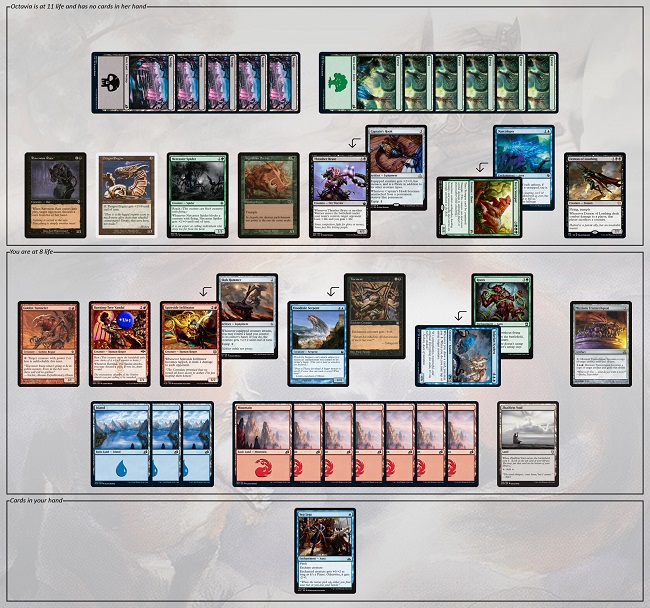 Octavia is at 11 life and has no cards in her hand. She has the following cards in play:

Instead, if you think you've got a great solution, you can send your solution to puzzles@gatheringmagic.com with the subject line "Puzzle - Thingamabob Doohickey" by 11:59 P.M. EST on Monday, July 6, 2020. We'll include the best ones in next week's article along with the next puzzle!

"I knew that Nine Lives was going to be trouble from the moment it previewed," Max Bernstein points out. "With plenty of life and Pashalik Mons on the field, Leon really should have known better than to play it. Oh well... his mistake is our victory!"

"Leon should have read the new card a little better before he played it," Jonah Comstock adds. "He was doing just fine stalling without it. Instead, what the enchantment has done is that it's effectively changed his life total to 9 - provided that each damage we do is its own instance of damage. And doing lots of small instances of damage (mostly while blowing themselves up in the process) is what Goblins do best!"

"Aviation Pioneer and Quicksand are a nice red herring pair," Michael Feldman writes. "You might think that Aviation Pioneer is the rightful focal point of the Telethopter / Select for Inspection combo. After all, at

, Aviation Pioneer leaves enough mana for Select for Inspection and Pashalik Mons' activation using basic lands alone, while allowing Quicksand to tap and sacrifice to finish off Krenko. The problem is that there's no way in that scenario to get enough Goblin death for Pashalik Mons to finish off Nine Lives.

"Instead, we'll need Quicksand for plain old mana, so that we can cast the seemingly bulkier choice of Everquill Phoenix. You might think its Feather token does something special, but it's really just Krark-Clan Shaman fodder:

"Hey, how about that - Nine Yards, Nine Lives, and Nine discrete steps to complete the puzzle!"

Interestingly enough, there's a variant solution to this one that involves using Quicksand for its more obvious ability. Hyman Rosen writes:

"As with other Lich-type effects," David Arnold notes, "slapping Nine Lives on the table gives you an interesting and creative way to lose the game. Given Leon's short-sightedness and risk taking, I'm just glad he's wearing a mask."