You wince. "Great timing," you admit. "In response, I'll sacrifice it to my Hobblefiend."

"Does it have a mana cost?" you ask. "Of course it has a mana cost. Nevermind."

"It's a good thing I drew that," Elliot says. "I thought I was going to die to that stupid dragon."

Your local game store has a full house going for its Core Set 2021 release tournament, which isn't saying much. With the current social distancing rules, each event is running at about half the normal number of participants - a far cry from having to elbow your way into your assigned seat.

On the plus side, however, there are a lot more of the tournaments - in fact, they've been running almost non-stop since Friday evening. And even if you haven't picked up the best card pool in the world right now, you've had an interesting exercise in trying to read facial expressions from a sea of masks.

Elliot, for that matter, is wearing a pitch-black face mask with the words "PHONE HOME" in big red letters. You wonder if Octavia had a certain movie in mind when she made that one.

"I'm surprised you're not attacking," you say.

"You've got me down to five life, so I need to take it slow," Elliot says.

Elliot shakes his head. "You've got too many cards in your hand for my taste. Besides, I might have some lifegain coming. I'll figure it out when I get myself to a better position."

"That's assuming that you have enough time to get yourself to a better position," you note.

You untap and draw a Pestilent Haze from your deck. So far you're not sure if you're unlucky or bluffing: You really want more creatures on your side of the table, but your deck isn't exactly cooperating with that plan. Elliot seems a little hesitant to make a move, at least.

You flip through the four cards in your hand once more, making sure that you're not missing out on any details. If Elliot's not making things up and really has some lifegain in his deck, you probably want to keep him from playing it. And the best way to do so, you muse, is to make sure that he doesn't reach it in the first place.

It is the start of your first main phase. Defeat Elliot before the beginning of his next combat phase. 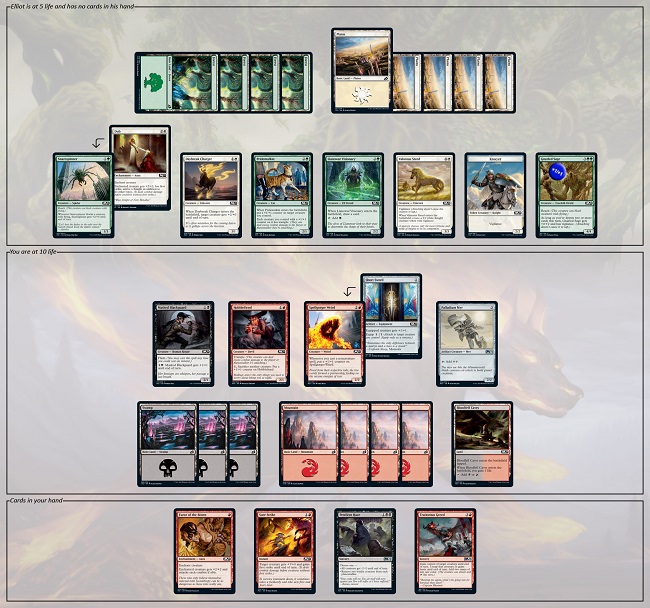 You are at 10 life, with the following cards in play:

Elliot is at 5 life and has no cards in his hand. He has the following cards in play:

Instead, if you think you've got a great solution, you can send your solution to puzzles@gatheringmagic.com with the subject line "Puzzle - Weirder Things" by 11:59 P.M. EST on Monday, July 13, 2020. We'll include the best ones in next week's article along with the next puzzle!

"Ever since the days of Alpha and Dwarven Warriors," Greg Dreher writes, "Magic has helpfully reminded us that small creatures made unblockable can suddenly get much larger. And that's what we're doing today: Sea Legs will make your creatures eligible for Goblin Tunneler's ability, and ultimately, you want a creature targeted with this ability to gain his sea legs and embrace the pirate life."

"The basic plan is not hard to spot," Jonah Comstock continues. "Make our creatures small enough to be targeted by Goblin Tunneler, then make them big enough to kill our opponent. Our equipment, Slab Hammer, is already well-positioned to help us here, since it doesn't pump our creature until it attacks. Sea Legs will help us get the rest of the way there - with a little help from Mizzium Transreliquat, which can apparently turn creatures into Pirates at instant speed."

The twist, however, is that you need to time your abilities and activations in order to maximize the damage you deal. In addition to this, Russell Jones points out that you also need some assistance from your other creatures:

Then again, a variant solution exists that leaves a single creature to deal all of the needed 11 damage. It's possible to get Spireside Infiltrator to 9 power in addition to its trigger for one, but you need to get creative for that last bit of life. Michael Feldman writes:

Jacob Butcher also notes that another variant exists for two additional damage. This route takes advantage of the fact that Sea Legs has flash: