Login
0 Item
Advanced Search
Sign In
Create Account
Editor's Note: Starting next week, our puzzles will appear every Thursday EST. Drop by our website on July 19 for more mind-twisting shenanigans!
You entered your second Core Set 2019 prerelease match feeling extremely cautious, and promising never to underestimate an opponent again. That was the result of a hard lesson from your first opponent, who dropped three Goblin Instigators onto the battlefield during your last game, made you chuckle, and then surprised you with a well-timed Inspired Charge. And so it goes, as they say.

It turns out that your current opponent learned the same lesson, except that the harbinger of his demise was a Trumpet Blast. "I had a Daybreak Chaplain in play," Huo explains, "but two blockers and an extra 1 life weren't going to cut it against seven attackers."

"We're a long way from the usual 'play removal, flyers or big creatures'," you admit.

You glance at your cards. "Uhhâ.â.â.â sure," you say.

"That's the only thing on your side that can block flyers, right?"

"Yeah. Are you attacking with your Angel of the Dawn, then?"

"I am most certainly attacking with my Angel of the Dawn. Take 3 damage?"

You scratch out another number from your scorepad. "That puts us at 4 life each."

"I might as well seal the win, then," Huo says, casting the last card in his hand. A Pegasus Courser is probably the last thing you want to see, if only because you now need to worry about two flyers on your opponent's side of the table.

Ironically, you do have a Shock in your hand, which is more than enough to satisfy your definitions of "removal". Even if it's capable of cutting Huo's life total in half, however, you don't have the means to take advantage of this. On top of that, both Huo's Pegasus Courser and Angel of the Dawn are likely to shrug off 2 damage, so there's not much you can do but pray for a good draw.

Incredibly enough, your deck comes through with a Spit Flame, which is enough to take out any of Huo's creatures by itself. Unfortunately, your opponent still presents a problem for you: if you take out one of Huo's flyers, the other will continue to raise the pressure. On top of that, Huo has a good stable of blockers that he's all too willing to use.

You study the board and try to figure out a way to end this game in your favor. You'd rather not start this day with a 0-2 record, after all. But then again, you wouldn't be here if you didn't think you couldn't handle the strainâ.â.â.â

It is the start of your first main phase. Defeat Huo before the beginning of his next combat phase. 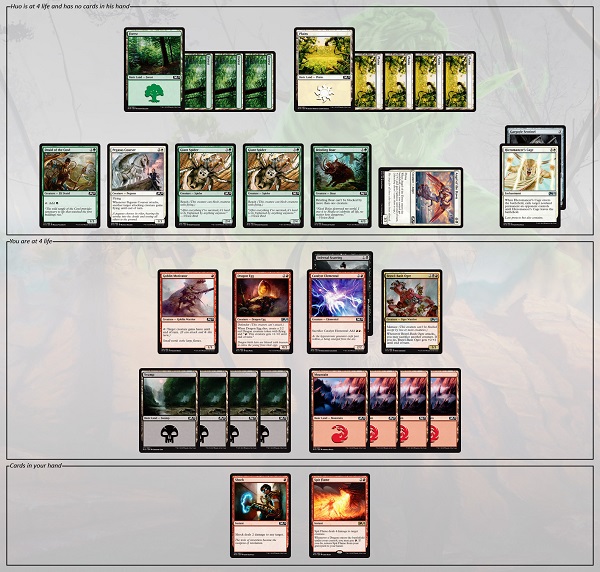 Huo is at 4 life and has no cards in his hand. He has the following cards in play:

If you think you've got a great solution in mind, don't put it in the comments! Instead, send it to puzzles@gatheringmagic.com with the subject line "Puzzle -- Can't Stand the Heat" by 11:59 P.M. EST on Sunday, July 15, 2018. We'll include the best ones in next week's article along with the next puzzle!

The original version of this puzzle had a slight error that deprived Plaxcaster Frogling of its three +1/+1 counters. This was corrected relatively quickly, since the frog mutant's ability is critical to this one. "Vorinclex, Voice of Hunger gives us lots of mana to make liberal use of Plaxcaster Frogling's ability," Chris Billard writes."In the end, this will force Desdemona to break her own contract."

"The trick to this one is that we don't have to win this turn," Duel Thyer notes. "We just have to find a way to stop our opponent from winning when we say 'go'. Fortunately, we have everything that we need to force them to kill one of the required four demons of the contract on our end stepâ.â.â.â but this is going to take a little set-up work."

You have just enough mana to pull this off, as Gene Beal writes:

"We survive the upkeep trigger," Norman Dean adds, "but we're not out of the woods yet. That Blood Artist means that Desdemona still has a non-combat route to victory, even through our Ensnaring Bridge."

Desdemona's best move, of course, is to have the Spitebellows trigger get rid of her Grinning Demon. Even if she does that, though, you at least now have some room to recover.

In the end, the only victim here is probably the designers' intent. "This is not the way Shroud and the Reaper from the Abyss' ability usually plays out," Subrata Sircar muses.

Editor's Note: Starting next week, our puzzles will appear every Thursday EST. Drop by our website on July 19 for more mind-twisting shenanigans!