"I just passed the turn. I thought I was lucky to have drawn that Remember the Fallen, but I wasn't sure if I had a good enough artifact target in my graveyard just yet."

"But you were at six life. You could have gotten back your Peace Strider and made your Glassdust Hulk unblockable."

You shrug. "I just thought I would wait and see," you tell her. "I had enough defenses, even when you took my opponent's flyers into account."

"What was her name again?"

"Mekeelah. With a 'k'. She was insistent about that."

Mari rolls her eyes. "As if the face mask wasn't enough already."

"Well, she was nice," you point out. "And the mask was at least interesting - it was some Pacific or Caribbean design. It really matched her dress."

"Okay, okay," Mari says. "Back to your Double Masters draft."

"And Mekeelah draws and lays out a Myr Retriever. I knew exactly what she was going to do at that point, because she had this gleam in her eye, and it wasn't as though I had anything that could foil her plans."

"She immediately sacrifices the Retriever to her Culling Dais. That gets her the trigger, which she uses to return her Sphinx of the Guildpact to her hand."

Mari consults her notes. "And she had seven more lands ready. Good timing."

"So much for killing the Sphinx with a Strength of Arms," you sigh.

"You could have still gang-tackled it with your Angel of the Dawn and Parasitic Strix."

"That would have left me open to her Bone Picker and Rapacious Dragon, though."

"Point," Mari says, nodding. "So, then what happened?"

"Well, I let it resolve. I mean, it wasn't as though I had a counterspell in my hand. Mekeelah seemed very happy about that."

"I can imagine. Was this when you drew the Sculpting Steel?"

"This was when I drew the Sculpting Steel."

"Right. So, your hand at this point," Mari says, consulting her notes, "was a Remember the Fallen and a Sculpting Steel."

"And your opponent was at eleven life?"

Mari thinks for a few seconds, and then raises an eyebrow. "So, did you win this game? I think you had everything you needed."

Your face sags. "No," you admit. "That's why I figured you would be interested in this one."

It is the start of your first main phase. Defeat Mekeelah before the beginning of her next combat phase. 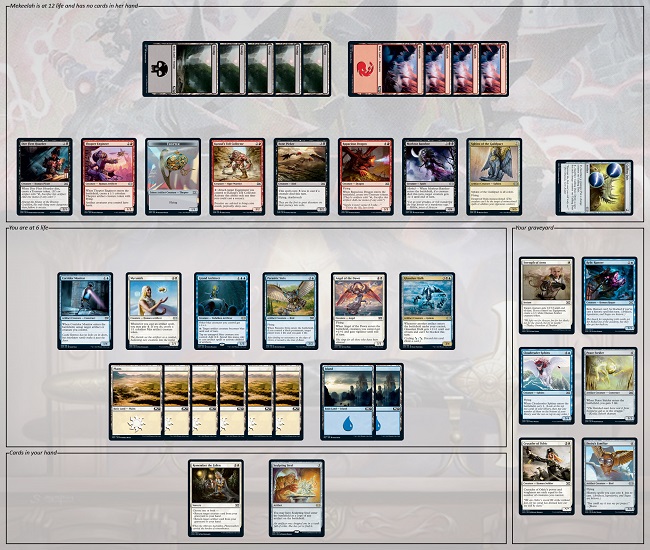 Mekeelah is at 12 life. She has the following cards in play:

Instead, if you think you've got a great solution, you can send your solution to puzzles@gatheringmagic.com with the subject line "Puzzle - Blueprint for Disaster" by 11:59 P.M. EST on Monday, August 17, 2020. We'll include the best ones in next week's article along with the next puzzle!

"Chekhov's Gun strikes again," Hyman Rosen writes. "When you have no Red mana sources and you can cast a card from your opponent's hand, but it has

in its mana cost, you just know that this card will be instrumental in the solution!"

Considering that you won't be able to use your Festering Goblin's and Slaughterhouse Bouncer's abilities unless they die themselves, you only have two options for the first bit of removal:

This initial move gives you a Treasure token for your trouble, which you can then parlay into Pyroclasm followed by Fiery Emancipation. Trey's 13 life can then fall in two bites: a 12-damage hit from a 4-power creature, and a 1-life loss from Accursed Witch's transformation.

The subtlety to this puzzle, however, lies in what your opponent can do. If you need to wait until your opponent's upkeep for a trigger from Infectious Curse, you may be opening yourself to as many as three draw effects: Shore Keeper, Frontline Sage, and Runehorn Hellkite (assuming that the latter dies). This might put your win condition to a grinding halt - depending on how much damage you take from Banshee, some direct damage from your opponent would be bad at this point. Your opponent might also pull a Stifle or Trickbind out of their sleeve.

Your best option, as Hyman points out, is to find a way to execute the Fiery Emancipation plan while simultaneously preventing your opponent from taking advantage of their draw effects:

"Accursed Witch and Vulshok Morningstar are that rare and interesting breed of red herring cards that are still factored into the solution," Michael Feldman adds. "The reason they are red herrings is that:

"However, there's just no way to inflict enough direct damage with Banshee. No matter how much mana you accumulate or whether you take advantage of Fiery Emancipation, you will always take as much sonic pain damage as you deal, and the life totals are just too far apart. Getting a creature through is the only way."