Login
0 Item
Advanced Search
Sign In
Create Account
Your opponent, Trey, is wearing what he calls 'the trifecta': Goggles, a face mask, and a nice-looking hat. It's oddly appropriate right now, considering that it's the third game of your third Unabridged Cube match today.

Trey adds a Fiery Emancipation to the three cards that are already in his hand. Thanks to a combination of Orcish Librarian and Frontline Sage, he's been able to stack his draws quite well: The only catch is that your Sen Triplets have thrown a spanner in the works, so he now has to consider his plays very carefully.

"I think this is an easy one," he says after three seconds' thought. "The first thing I should really cast is Amnesia, or otherwise you'll throw it at me next turn."

Trey taps six lands and drops the Amnesia into his graveyard. You discard the two cards in your hand - not that they were of any use to begin with.

In the meantime, Trey counts his lands. "It looks like I can cast one more," he says.

Trey thinks for a bit, and then lays his Runehorn Hellkite down on the table.

Fortunately, it doesn't look like Trey wants to throw anything into the red zone: He's lacking in good-sized attackers right now, and that means you have at least one turn to find a solution. Seeing that you're at a paltry four life to his thirteen, that's a good thing.

"I guess it's your turn now," Trey says. "You've probably got three guesses as to what I'll do next turn, and the first two don't count."

You untap your permanents, wondering what you could possibly draw that can get the advantage back. Your local game store's Unabridged Cube has one of each card ever printed, so there are more than a few possibilities for the top card of your deck... but sometimes the universe ends up three bricks shy of a full load and gives you a land.

"At the beginning of my upkeep, I'll target you with Sen Triplets," you formally declare.

"You know what's in my hand," Trey says, laying it down on the table. A Pyroclasm and a Fiery Emancipation aren't exactly filling you with confidence at the moment, but maybe your draw will change your tune.

Unfortunately, it doesn't. While a Void Snare isn't a land, it's not permanent removal either - and you want something that'll keep you from a match loss right now.

"Not a good draw?" Trey asks. With 'the trifecta' in place, it's really hard to read his expression.

"It's better than I expected, and yet it's worse than I wanted."

"There's probably a third option in there somewhere."

You sigh. Trey's probably right in that there's a way to win this, but the board state is definitely going to make you work for it.

You wave him off. "Just give me three minutes," you say.

It is the start of your first main phase. Defeat Trey before the beginning of his next combat phase. 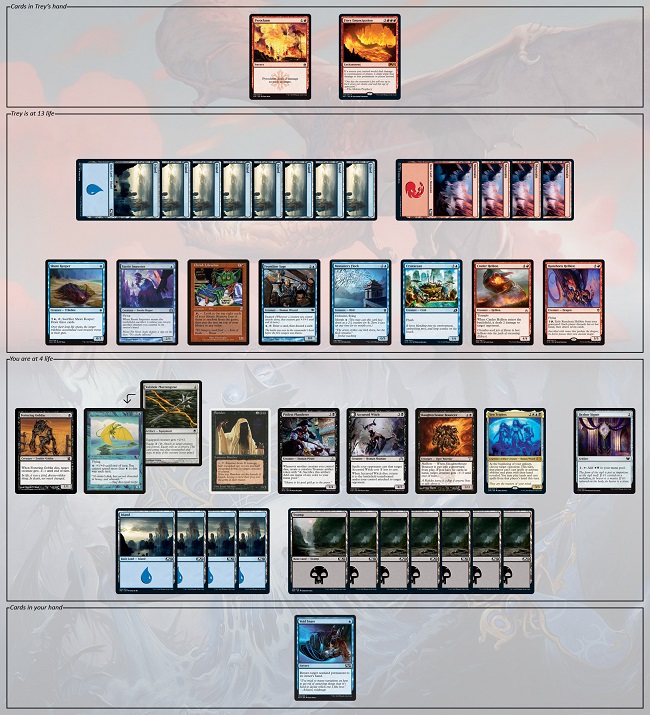 Trey is at 13 life. He has the following cards in play:

Trey has the following cards in his hand:

Instead, if you think you've got a great solution, you can send your solution to puzzles@gatheringmagic.com with the subject line "Puzzle - Three Strikes" by 11:59 P.M. EST on Monday, August 10, 2020. We'll include the best ones in next week's article along with the next puzzle!

"Aside from managing the timing," Hyman Rosen writes, "the only tricky rules issue is knowing that making a copy of a permanent that is a creature due to an ability does not duplicate the animating ability, so the copy likely enters the battlefield as a non-creature."

This bit turns out to be particularly important, because you don't have a lot of good targets available for Heat Shimmer. As Russell Jones points out, though, your best move is to simply create one:

Curiously, a number of solutions point out that you don't actually need Heat Shimmer to win this game. "If you had given us more Red mana," Sean Patrick Keatley writes, "this would have been trivial, but as it is, we have what we need. The trickiest part was figuring out the last point of damage, but then I remembered I could Ephemerate the Goblin Arsonist."

"The lack of mountains made this a bit tricky," Max Bernstein adds, "but luckily each one counts for two red! Thanks, Mana Flare(!):

Finally, Evan Hill notes that this solution opens an alternative method of putting Goblin Arsonist into your graveyard. As it turns out, sending the Arsonist into combat works just as well... provided that you force your opponent into an untenable situation:

"At this point," Evan explains, "my opponent cannot block my dragons because they have flying. They can block my Goblin Arsonist, but with the zero-power Wall exiled, Goblin Arsonist will deal them one damage either way. Furthermore, I can pump one dragon's power by 1. That's a total of 12 damage: 10 damage from the dragons, 1 from the Goblin Arsonist, and 1 from the Fervent Paincaster."