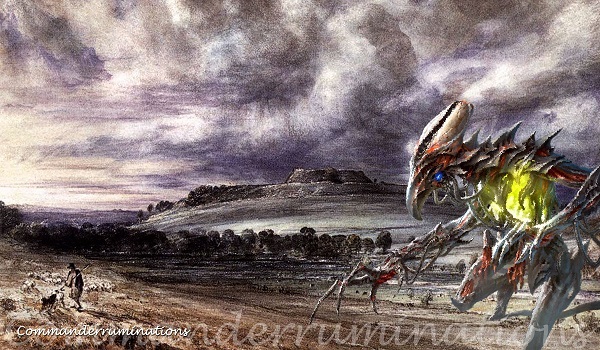 I don't mention it that often here in my weekly column, but I run a weekly Commander League at the LGS I play at. It's free, we play two rounds of EDH and since I run it, I'm nearly always there.

One might suggest it's a clever way to make sure I can get in at least two games each week against a fairly random assortment of opponents. I love variety and I'm a good enough player and deckbuilder that I've won my fair share of months since the league started up in 2016.

We have a theme every month and the theme for the current month is "pre-Commander commanders." That means any deck with a commander first printed before June 2011 will earn extra points. I like to play on theme and I like to try to go for the occasional month win when I know I won't be missing any weeks.

I've had a few old commander decks but was only ready to run Multani, Maro-Sorcerer going into September until I realized I might have another option available to me: Slivers. I have a The First Sliver deck that could easily have Sliver Legion swapped over to lead the tribe for a month just so I'd be on theme.

I don't have a Sliver Queen (yet) but Sliver Legion is a capable enough commander for a meta where the power level is medium to high, but you don't see too many cEDH decks. They don't really want to pubstomp, so they've been giving our casual league a pass since we restarted this past July.

My problem is that I think way too much. Sure, I could swap Sliver Legion into the Command Zone, but that led to me wondering if there was a stronger build I could put together that would better take advantage of what Sliver Legion brings to the game.

Too Cute By Half

One lesson I've learned from playing my Lathliss, Dragon Queen deck is that going all-in on flyers can be an incredibly strong strategy. I've both murdered tables and I've been murdered by decks that were simply well built aggro decks that just happened to load up on flying threats.

My first thought when seriously considering switching to Sliver Legion was how many Thopters, Drakes and other cheap flyers I could turn into Slivers so that Sliver Legion could let them swing for huge amounts of damage.

It's not that hard to fix your creature types, and with access to every color I could easily add in a few tutors to increase my chances of getting one of these onto the field.

It's also not hard to load up on flyers, and the idea of flooding the board with these guys and then dropping a type-fixer, playing my commander, and swinging for the win is very appealing.

The problem is likely just that this deck would rely upon getting your type-fixer onto the field, protecting both it and your commander when every opponent will probably assume they have to stop your shenanigans or they'll die to your huge flyers. I love overly complicated scenarios but I've learned over the years that when you depend upon a few key permanents to be able to mount a threat, those key permanents don't usually stick around very long.

The other issue with this concept is just that it wants to be a deck that does a great job at generating tokens. Any time you want a Commander deck to be great at something, you really want that thing to be available to you right there in the command zone. Having to hope you draw into something that is a main part of your deck's game plan isn't ideal. That doesn't mean this deck couldn't work and I've loaded it up with enough 5/c staples that given enough games, it might have a shot at doing what it was built to be able to do.

It's fun to build complex decks and watch your plans come together in a game, but it's also frustrating when you don't draw into the key pieces you need or can't keep them out for long enough. My heart was leaning towards that Sliverless rebuild, but my head was telling me to keep things simple.

Slivers aren't simple by a long shot, but faced with a choice between a crazy rebuild and a simple commander swap, I had to seriously think about what my The First Sliver deck would look like with Sliver Legion in the command zone.

This isn't a combo Slivers deck - it's a deck with the simple plan of trying to play out as many Slivers as possible. I like decks that know what they're trying to do, but this deck really just plays slivers and hopes for the best. With some tribes, that's not a great plan, but with Slivers you'll always have a shot at seeing your deck do something cool.

The argument for keeping the deck intact was a really strong one. Slivers are amazing, and having your deck able to present a threat even if your commander isn't on the field is important. I was going to play this in a fairly competitive setting. I had to assume I might be up against some very good players on very good decks. The guys I play against would figure out what I was up to, and my Maskwood Nexus wouldn't last long enough to make a difference.

How It Played Out

In week one of our September games, I did play a game with Silver Legion and a game with Multani. I ended up going with the simple solution to my quandary. I played my Slivers deck with my commander swapped out and with Sliver Legion in the command zone in round one.

I went into the game assuring the table that it wasn't an incredibly tuned deck, but Slivers are Slivers and I was able to get a pretty crazy boardstate in fairly short order. I saw not only The First Sliver but also the Legion and I was able to bounce back from a boardwipe and win the game quite handily. I think the card that pushed me over the top was Kindred Summons, which can take a modest army of Slivers and turn it into a win pretty easily.

The that drove me to go with my simple solution is that each Sliver brings its own unique shenanigans to the party. I might hit a Sliver that gives my Slivers flying, or deathtouch, or double-strike, or all kinds of other neat tricks. The flying tokens concept wasn't the worst idea ever, but it ignored that extra effect that every Sliver can bring to the game. A mass influx of Slivers with just one haste enabler can turn a game around immediately without having to wait a turn cycle.

My second game with Multani was fun, and I was able to kill two of my four tablemates but I didn't get the win. I got a fantastic point total from my round one game, and with a decent round two, I ended up getting my highest one-day point total of the year and found myself first place in our rankings! I'll be missing the second Saturday so it's unlikely I'll be able to win September, but it was a great day and it definitely confirmed that I made the right choice.

Have you ever found yourself diving down a rabbit-hole of weird, interesting, but also suboptimal deckbuilding strategies because you got a neat idea and couldn't shake it?

Were you able to resist the urge, or did you end up building out your crazy idea? Did the deck actually work out, or did you realize you were making things more complicated than they needed to be for the commander you were building around?

A part of me definitely wishes I'd taken the plunge and tried out my Sliverless Legion idea, but between work, life, writing, running my league and playing EDH I just didn't have the spoons, as the kids say, to get it done. I also got some pretty good results out of sticking with Slivers, so I can't say I regret the choice I made.

That's all I've got for today. Thanks for reading and by next Monday I should be taking a look at one of the new Legendary creatures we've seen previewed in recent weeks.