The weekend has come and gone and by the time the dust settled on the Modern Grand Prix in Vegas, the following morning we'd see an online PTQ in Modern as well.

KCI was the big story of the Grand Prix, with Matt Nass piloting the eponymous deck revolving around Krark-Clan Ironworks.

A big part of this story was the story of Nass himself, with an incredible 36-6 record in his last three Grand Prix with the deck. However, the other story that might have been hidden below the fold is the story of the archetypes in the Top 16. 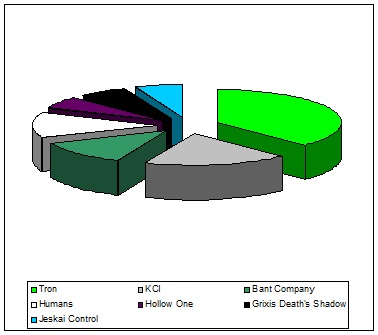 That's a pretty intense thing to see. Despite Damping Sphere, Tron was in full force.

Interestingly, the next day, things looked a lot more diverse in the PTQ online. This isn't surprising for numerous reasons, not the least of which is the shorter length of the event; with only nine rounds, the sifting of a tournament isn't as intense. There were 28 players tied for the Top 8 of the event. Tron was represented well, but KCI didn't even break into the mix of the 7-2 or better players. Here is the breakdown of the top decks: 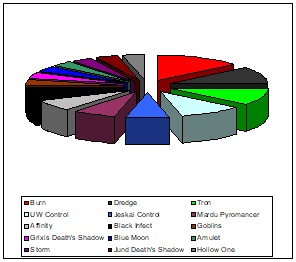 To me, Burn always feels overrepresented online, and this is partly an example of card availability; Burn is generally relatively cheap to build, and Modern rewards format knowledge, so once a Burn player gets their deck together, they can get good enough at the deck that it becomes questionable to switch out of the deck.

None of the Burn decks in the PTQ made Top 8, but if you look at the full list of decks in the Top 32, only one did anything particularly special to try to stop Tron or KCI, Wuby123, who chose to run Stony Silence in the board.

Stony Silence is a pretty hardcore answer to Tron and KCI, but perhaps it makes sense right now, even for a deck like Burn. I'm a little loathe to go in that direction, personally, because I like to keep my answers in a deck like Burn to a minimum -- every card you draw that can't deal damage really has to justify itself when you're playing a card that tosses away cards for only one effect: lowering the life total. Still, now may be a moment that the card is justified. Unfortunately, we can't look at Wuby123's game history to know if this choice paid off or not. It could have just as easily wasted space.

Despite being antithetical to the nature of what Burn does, one thing I like about the call to include Stony Silence in Burn is that it is a cheap, effective disruption spell that can devastate the opponent being employed in a deck that can also put on a clock. Stony Silence is a great card, but it is much more frightening when it is in a deck that can just kill the opponent while you look for the answer to deal with it. In effect, it makes me imagine my opponent's world rocked, them barely able to keep themselves up, and a disembodied voice crying out "Finish them!"

You can see a similar choice in the sideboard of s_b_i_r_u's PTQ choice that they took to a Top 8: Affinity.

This is a wildly fast build of Affinity, playing a few cards we haven't seen much of recently, with Memnite and Bomat Courier joining Contested War Zone, and a sideboard that basically tries to hate the opponent out for as cheaply as possible, including two Damping Sphere as an anti-Tron/KCI/Storm choice.

This is a pretty wild build, but it does hammer home for me the real value of a card like Damping Sphere: if you're ending the game quickly, a Damping Sphere can just nail the game closed against decks that do silly things with mana, be they KCI or Storm or Tron. This is a part of the reason why my current Modern Elves list has moved up to two Damping Sphere in the sideboard.

Of course, the most incredible recent example of a deck making use of this "finish them" principle, is absolutely the PTQ winner, rizer, with this deck:

This deck is fast. It is fully capable of explosive early games that end obscenely fast, and it can also sandbag for a surprise attack with one of the eight bushwhackers -- four Goblin Bushwhacker and four Reckless Bushwhacker -- to come out of nowhere for a kill, not to mention the reach afforded by Goblin Grenade.

In this deck, three Damping Sphere seem like a perfect addition. Tron and KCI made up over 56% of the Top 16 of the Grand Prix just the day before, information that rizer surely knew. When your only real fears are the fears of obscene effects from crazy mana, running a Damping Sphere seems like a perfect solution. "Finish them!", in essence, isn't just about having a fast game as a Plan A, but also about having the kinds of sideboard options that you can legitimately force them to not only answer a fast clock, but also be required to answer a problematic permanent.

Frankly, I see a decklist like rizer's Bushwhacker Red and I get a little thrill at the prospect of playing this deck in a long tournament. It's exciting imagining the short rounds and the dumbfounded looks from opponents who had no idea that they were in such incredible danger.

The principle of these decks can be applied to any aggressive deck so long as it is sufficiently aggressive. Damping Sphere is available to any deck that doesn't hamstring itself with it. For White, Stony Silence is a great choice as well, even if it doesn't hit certain other archetypes like Storm.

KCI and Tron are in the public eye because of Grand Prix Vegas, but I think that we'll soon be seeing them acting more like Dredge has been in the past: a powerful deck, but one that is easily pushed out of the metagame if enough people decide that they've had enough.

I'm one of them. You can find me and my sleeved up Damping Spheres at the next Modern event, I'm sure.