I have been writing for a few years on the joy of collecting art. Seeing a work of creation that has both intention and your own ascribed meaning to it adds warmth to your everyday experience. It is adding beauty to the world, and keeping the creation working, that is, being appreciated and seen is an effort in advocacy for art.

In the past, I have argued that what makes something art is the act of intending to make art.

As anything can be art due to Duchamp and many others ascribing meaning to things from fountains to spinning wheels, what it boils down to is the act of a creator intending something to be art, and as such, creates meaning, creates art.

The main element of art is the impact of the viewer, less the thing itself. If a creator explains their intent, it becomes art. The gap between creating an art, and what an individual takes away from a given art is the art experience. That pressure, or tension, creates significance and Art is made when people see the space between as how the art impacts them more or less than whatever the art item may be. 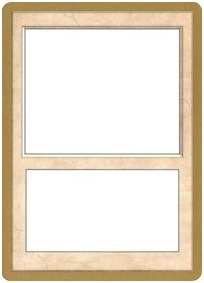 The fine art community struggles with illustration as the intention is not chosen by the artist. It is often known as art without a soul. Its intention is to fulfill a need of another. The artist is making a thing, a craft item, instead of making meaning out of nothing. In context, a Magic card without art, without mechanics is just a frame. It is a blank canvas that an artist needs to fill with necessary elements to make a whole purpose, a whole concept. What makes Magic attractive or marketable is the art, not the mathematical part of the game.

However, when removed from the frame, Magic card art illustrations change meaning. Their intention is to refer, and nostalgia and warm glowy feelings can be had by viewers.

Zero Magic paintings are currently in a museum accessioned collection. This will soon change, and will do so in the near future. The meaning of an Alpha art, for example, has had collectors seek them out as of late, with only a handful still in original artist's or descendant's hands.

As the game reaches year thirty, forty, and beyond, we can hope the major works, the art everyone wishes to see, will be accessioned into museums. I carry an internal list of what I believe will make it in first and at the top of that list are artworks that transcend gameplay. Black Lotus is on that list.

I'm here today to make an announcement on that front.

The Black Lotus original sketches by Christopher Rush are for sale right now. 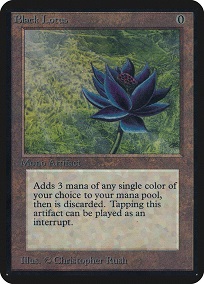 They were intended to be processes for a card art illustration and as such, are not large and are not elaborate. They served their purpose and unlike many sketches at the time for Magic, were not discarded or lost to time.

The current owner reached out to me to talk about them in depth, as I explained to them that were they to go directly to another collector, we lose our window to talk about the art, to see the art. Most players still have no idea what the Richard Garfield Proposal card art looks like, and while that hopefully will be seen in time, these sketches may never surface again until a museum has them in their vault. And as such, most museums only show 4% (at best) of their collection for public viewing.

It is imperative that we are aware of what art still exists, or has been lost entirely. Black Lotus has sketches, they exist and we are here to see them. 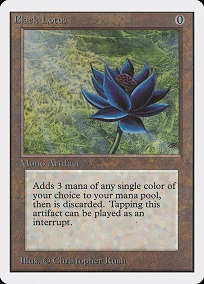 The rough pencil is 4" x5" (10.16cm x 12.7cm) and the preliminary sketch is 4"x6" 10.16cm x 15.24cm). Both sketches are on a folded single 8.5"x11" sheet of what looks/feels like printer paper. Compared to the original Black Lotus painting at 5"x7", these are appropriately sized sketches. As a reminder, the 5"x7" common Alpha size is due to the size of the scanner at Wizards of the Coast and people just assumed larger was less possible.

To show detail, there are three photos and you will notice a masked note. This is on the original and not able to be shown for provenance reasons for the current owner. These aspects are impossible to falsify and help prove that it is indeed the original. The current owner purchased it from a Rush family member. Any news on it will be posted in the MTG Art Market group on Facebook, where most art related news and sales are occurring in 2019.

The first is at a regular/normal brightness. 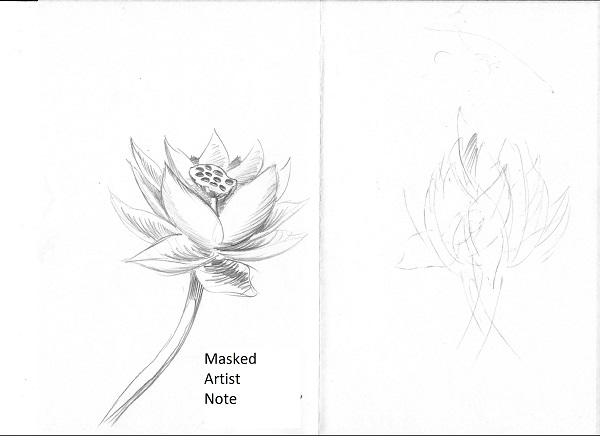 The second photo is the same images except altered to be -50% Brightness. 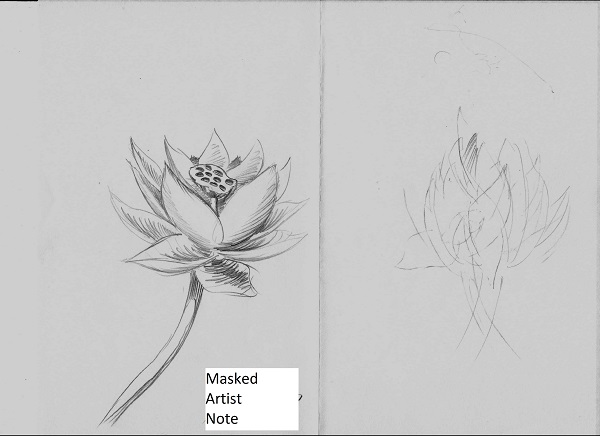 The final image is at -80% Brightness. 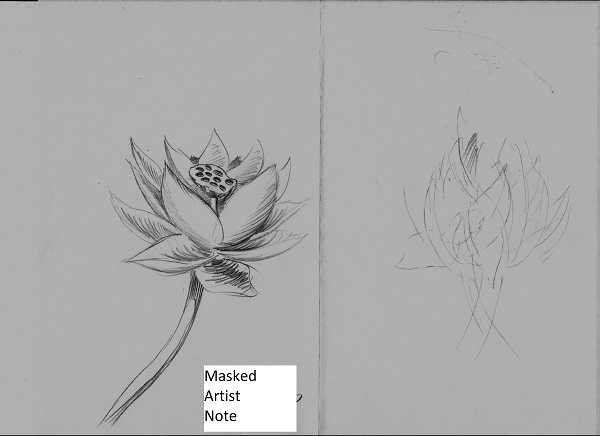 I look forward to seeing more Alpha art in the future, and I consider us lucky this week that we get to be aware that they still exist. They are art, and as a historical item for a major card game, their context is unmistakable, their importance sizable.