The heat wave has broken, but you find your day of leisure lacking the expected autumn rains that often follow. Pure white clouds, spread thinly from a cool breeze, meander across the bright sky with no destination or definitive direction. Occasionally, one passes across the sun for a moment, dampening the light, but unable to fully suppress the bright colors that appear everywhere today.

You find your feet once again carrying you toward the wood that surrounds the monasteryâs small valley. Of late, you have spent many hours there, walking alone for reasons beyond your understanding. It is peaceful and relaxing to wander through the timber without human contact, but you do not know what prompted you to begin the activity.

As you enter, the air cools noticeably, and the world darkens slightly. Yet even

when the clouds covered the sun, the world refuses to dull, leaving the woods full of life and color.

A brisk pace brings a light sweat upon your brow and neck, and you decide to rest alongside a small, clear pool. After taking a drink from the refreshing water, you look up to find yourself face to face with a creature like none you have ever seen. 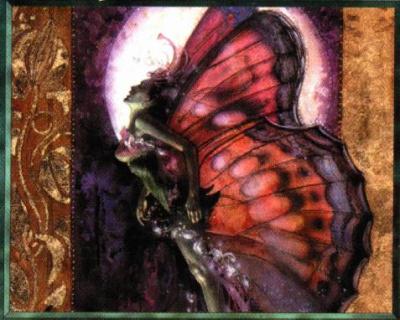 Her skin is a dull green, as if moss had grown over her whole body, then fallen away, leaving only its color. Her body is lithe and firm like that of the stable girl, but fully grown. Yet, despite an obvious maturity, her entire height cannot be longer than your forearm. Finally, the most inhuman aspect of the being before you are the wings across her back, painted with every color imaginable and in the shape of a butterflyâs.

You are from the valley, are you not?

Unable to trust your voice, a simple nod answers the question.

As I thought; I am glad you came. I find it lonely here at times, and the wizened old man visits but seldom.

What old man? Why, the one whom you visit. Do you think he lives in that musty study of his? He does spend much of his time there, but he likes the fresh air and pleasure of nature the same as you.

The creature giggles in high, short notes with a hint of a melody, leaving you unsure of whether it was a laugh or song you had just heard.

Oh! I am sorry for not introducing myself! My name is Kyri, and I am a friend of Issar Roon, just as you are. He brought me here from the Whispering Woods because of an incident that I do not wish to speak of.

But, you like stories, donât you? He has spoken of your frequent visits to his study. I am not one to talk much of myself, so how about I tell you a short story instead? It is from my home in the Whispering Woods on Dominaria.

It begins a few short centuries before the Phyrexian invasion on the continent of Aerona. Aerona is located in the northern hemisphere of the plane, far from Jamuraa. I seem to remember our mutual friend telling me he had told you of the southern continent once, yes? Aerona contains many well-known locations upon Dominaria, such as Llanowar, Keld, Hurloon, Benalia, and my home, the Whispering Woods. 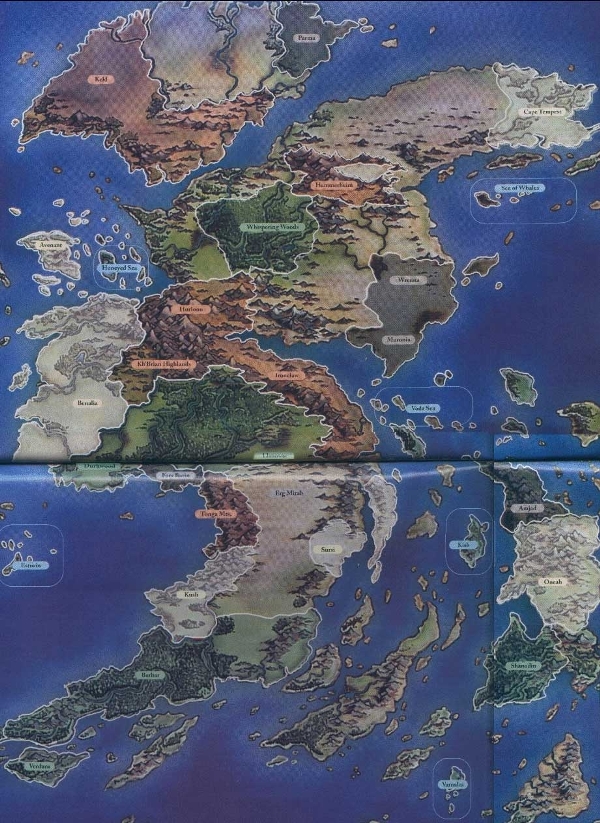 Why is it called Aerona? I can see the question in your eyes, and I am happy to answer it. It is named after a forgotten goddess of fertility who gave herself to the people so that they might harvest crops and have a place to live.

The Whispering Woods lies in the middle of North Aerona, the northernmost woodlands on the continent. Its size is tremendous and almost rivals the famous Llanowar. One can wander for weeks within without ever seeing a field or meadow. All of this is looked after by a creature named Gaeaâs Liege. He is the forestâs maro-sorcerer, and is a legend among the people of Aerona for his fierce protection. 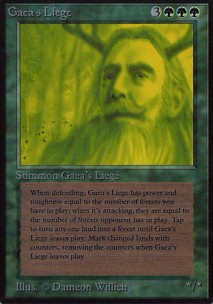 In the time leading up to the Phyrexian invasion, mages and wizards flourished. What little animosity for magic that had made its way to Aerona during the ice age had dissipated, and planeswalkers did little to interfere with the affairs of lesser spell casters.

Within this âgolden age,â some mages took advantage of their power and freedom. They began to exercise their might, and inevitably found themselves competing against one another. This was the beginning of the Wizardâs War, but it were the common folk and creatures, uninvolved in the affairs of the mages, who suffered. This created a much larger outcry against magic among the continentâs population, but it was focused on a small group, rather than magic itself.

Luckily, there was one who was willing to take up the cause of the people and fight the terrorizing mages. Her name was Greensleeves, and her beginning was a bit strange. Unlike many of the heroes the old man has told you of, Greensleeves did not start off as a humble woodcutter or farmerâthat was her brother. Greensleeves was a half-wit child. She was unable to talk, and could often be found simply playing with what was lying around her for hours and hours.

What changed her from a half-wit into a crusader for the people? Well, that is a story the old man should tell. What I can say is that she was successful, and Aerona enjoyed a few centuries of calm peace before the Phyrexians arrived on Dominaria. What you should remember is that heroes come from among all places of life; forgotten sons, half-wits, orphans, and even creatures like me can become a champion of the people.

The laughâsong comes again, almost melding with the sounds of the pool beside you into a deeper melody. As it fades, she looks at you with glee in her eyes and asks:

Did you enjoy my story? I hope so! It is the first time I have ever shared stories of my home with anyone other than the old man. If you listen to him and learn what he is trying to teach you, maybe you will one day be able to see it for yourself.

Wishing for another drink, you dip your head while she pauses, but when your head rises, she is gone. Not entirely sure that she had ever been there at all, you shrug and walk on through the woods.