Hello all! I hope that you are having a joyous day today! Today I want to look at another 10 great new cards from the deep set Kaldheim. Ready for the fun to begin? I hope so!

This is my fourth article looking at the best of the best from the set. Each article has 13 cards including three Honorable Mentions, and thus there are now 52 cards, in order, for Kaldheim in these articles! You can check out the other three to see where I put the top 52 cards in the set.

Want to check out this slate of a baker's dozen of cards? Let's do it to it! As a reminder, this list is for multiplayer formats like Commander. And Commander as well. Don't forget Commander!

Hello, land fans! This should be legendary. I know that Mark Rosewater told us it wasn't, but legendary status also matters for cards like Sisay, Weatherlight Captain and Kethis, the Hidden Hand. We need legendary lands in those places. The most common format, Commander, loves it as well! I know that you'll welcome The World Tree to your gaming fun times! It taps for a color, and then if you have six lands, they all tap for any color, which is easy in multiplayer. Then you can sacrifice it with a Door to Nothingness amount of mana and you Tooth and Nail your library for every God you own. They arrive to the battlefield ready to punch. They'll have abilities like indestructible that will keep them in play and enable this as a great flavorful win-con!

Hello fans of planeswalkers! Niko Aris isn't the best planeswalker, but Niko will do! It's the second planeswalker with an X, so that's cool and on arrival you can make some Shards that can be sacrificed for cards and scries, which is better than Clue tokens. Niko can be a 3-drop with no Shards and then you can +1 to push a dork through unblemished, although it self-bounces after smashery, which is fine if you want to recast it and get another ETB trigger. The first -1 will Shock a tapped dork which is common in the early game as people tend to swing heavily, and then the second -1 will make a Shard. Niko Aris feels at home alongside decks that care about enchantments, dealing combat damage to a player, abusing enters-the-battlefield abilities, or decks that seek a mana sink. That's pretty flexible and you can get a lot from it, but Niko really needs mana for its Shard-making and Shard cracking to be fully competent.

Do you like the newest Vampiric Dragon, Immersturm Predator? I hope so! This bad Rakdos Ravager is ready to party with the best of them! Its first ability lets it trade exiling a dork from a graveyard for a +1/+1 counter as it taps. Swing and use its other ability - it's good either way! It eats up creatures from opponents' graveyards so you don't have to self-snack. The second ability gives you the option to sacrifice a dork for the cause and give indestructible. Need it in combat? Swing first, then use it, so the tapping won't matter. You can exile the guy sacrificed if there are no other options. The card synergies are deep with this one!

This card reminded me of Decree of Justice, which is a good card to remind me of! You can net a Serra Angel for a one-mana discount! You can also foretell it and then cast it for five to get two Angels or seven for three, and so on. It's a solid mana sink and a solid card for your consideration.

The first of three Sagas on our list! Arni Slays the Troll is a face-puncher extraordinaire! You get a great fight for 2 mana on the first chapter, which can serve as creature control for your colors. Then you get a mana and two +1/+1 counters on a dork for your two-mana investment, giving you one back. Then you gain life on the third turn, although that is less important than the first two. Creature control? Mana? Permanent pump? This card does a lot for a Gruul shell! Run to the Sun! Here's one for the road... (Song by Erasure.)

8. Battle of Frost and Fire

Our middle Saga is this double Pyroclasm for non-Giants as well as walkers of the planes. Battle of Frost and Fire is great for Giant builds obviously, but fine elsewhere. Four damage clears out a lot of bodies in Commander, from Karmic Guide to Flametongue Kavu to Solemn Simulacrum. And you keep your sweeper and scry on your next turn, which is pretty sexy and keen. And cool too. Then you net some cards on the turn after, with two cards drawn and one card kept as you cast bigger things. Like Giants. God stuff, right? Actually, I misspelled that from "Good stuff, right?" but it feels more like Gods in MTG than good, so I am keeping the typo.

Coming in here are the 10 cards in this uncommon cycle that tap for one color of mana and then have a sacrificed activation cost in two colors with a cool ability that really fits the color combo. Axgard Armory is the first in the cycle alphabetically, so it earns the place in this list but every land is here. This list reminds me of the uber cycle of two-color activated lands that are heavily played in Commander, including Kessig Wolf Run. That's a great cycle to remind me of. This cycle taps for a colored mana, which is better, but it enters the battlefield tapped and requires a sacrifice to use, hence this cycle falling back here in my fourth list. Don't sleep on it though, especially if you have a card in that archetype; Axgard Armory is perfect for a Boros Equipment build. Good stuff!

6. Showdown of the Skalds

Ready for our final Saga? It's one of the earliest previews for the set and it's clocking in here at #6 in my fourth list, just outside of my Top Five. Showdown of the Skalds will exile four cards on arrival, and you have until the end of your next turn to play them. Save your land drop after you cast it so if you exile two lands, you'll get both. On the next turn when you untap and have the exiled cards to cast, you get a +1/+1 counter on a dork you control each time you cast a spell, which works well with the first ability. And the ability sticks around for another go-around. This four-drop is perfect in a Boros Aggro deck that wants to refill with cheap stuff after dropping its hand and yields four cards for 4 mana in a red way. Its great value!

Ready for my Top Five? Okay!

Arrrggghhh matey. This should make Pirates, but hey, they aren't likely to be in a Viking-themed set, I suppose. This is a powerhouse in decks that go wide and run Vehicles and/or Equipment. They are Dwarves so Dwarf Tribal loves it, and equipment decks that like to have a lot of bodies like Jor Kadeen, the Prevailer love them as well. But what really pushes this over the edge is the free equip of the tokens that arrive to the party, so making this a tap out before attack should go well. Check this out with fellow Kaldheim commander Koll, the Forgemaster who'll give the newly equipped tokens a +1/+1 boost! Nasty right? Right!

This is our highest-charting uncommon and non-rare (or mythic rare). It's a great answer for the kitchen table and based on your metagame at your local game store this could be a lot higher than it ranks here, or much lower. It makes players (yourself included) play fair with graveyard shenanigans and shuts down instant and sorcery recasting from the graveyard like flashback or jumpstart, or leaders like Kess, Dissident Mage that cast cards from the graveyard. It shuts down reanimation and other strategies that seek to dominate the graveyard like Meren of Clan Nel Toth. If that is played at your kitchen table and Commander metagame, you just got a colorless tool to make them play fair other than Black's normal effects like Planar Void! Enjoy it!

Kaldheim is a tribal set with a big number of tribal enablers in various places and none is better than this bad boy who will Fork your creature spells of a given type (without any additional mana like Mirari). It's usually used for creatures, but you could have a Rebel, Goblin or Eldrazi with a non-creature card type running around to copy with Reflections of Littjara. Tribal decks tend to be dense in their tribe and thus there is a lot of opportunity to abuse this card all day long. And all night as well I suppose! 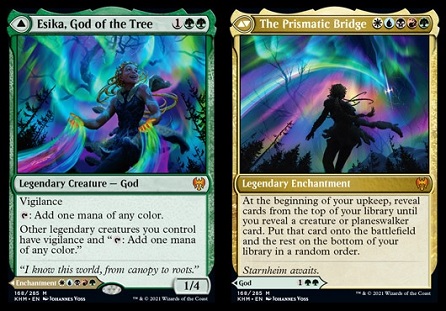 Our only God in today's countdown is Esika, God of the Tree! I really like her in Commander and I really like her leading a deck, and I really like The Prismatic Bridge as your Commander getting cast from the Command Zone! And it's not just me, over at EDHREC.com we already have 300 decks registered with her! The Prismatic Bridge is a hard-to-answer permanent since enchantments are the hardest to answer, and when they do you can just recast it. You get a free dork or planeswalker each of your upkeeps onto the battlefield from your library without bothering with that thing called mana. It's awesome! Note that you have to wait an entire run of turns before you get your first trigger, so if you try to be overly abusive you are subject to sorcery speed removal like Vindicate - which implies you should play fair, not foul with this. Enjoy the penultimate card in our countdown!

But what comes out on top?

Barkchannel Pathway and the rest of the Pathways do! These are hard to rank on a Top Ten New Cards List! They are, technically, new cards that finish a cycle that's beloved by many. But they should have been printed in the previous set and had no business being here, and are obvious cards to boot, so there isn't a lot I can say that I haven't already said, right? Right! I hope you like the rest of the Pathway cycle that's now complete.

And there you are! What did you think of my list? I hope that you enjoyed it! Anything I missed or that you didn't think about but it on your list now? Next week let's look at my favorite art from the set, okay? Okay!