Explode your new goblins from Secret Lair in this competitive multiplayer deck.

In Oathbreaker, everyone starts with twenty life two cards in their command zone, a Planeswalker, and their signature spell. As long as your Planeswalker is in play, you can cast their signature spell, and everything is taxed two more each time. In my previous Xenagos article, our token deck wasn't designed to use his ultimate. This time, we hope to never use his zero ability. Instead we wish to plus him, getting mana for casting goblins and Empty the Warrens in the same turn, and inching closer to his ultimate. In this deck it's likely to unleash a hullabaloo of goblins.

I played against this deck at Commandfest Seattle, and my opponent began with a bang: Goblin Lackey into Siege-Gang Commander. But even without that ideal start, things escalate quickly with Xenagos powering out larger and larger Empty the Warrens. Your goblin throng can attack with haste thanks to your lords or Goblin Bushwhacker. 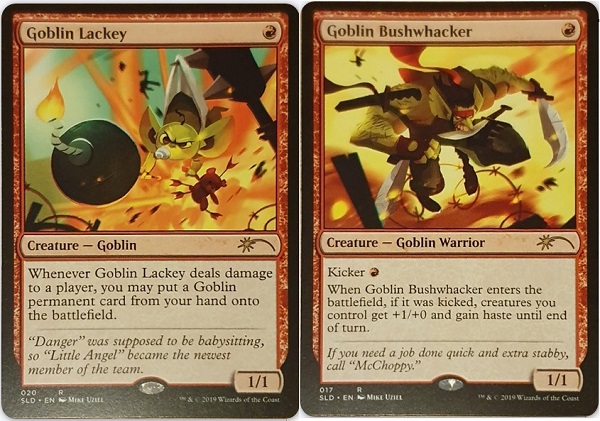 You can also sacrifice your goblins to enable death payoffs like Fecundity, Pashalik Mons, and Goblin Sharpshooter. With Goblin Bombardment in play too, each of your gob-gobs can deal two damage without even attacking. Now that's some real Green-skinned fireworks. 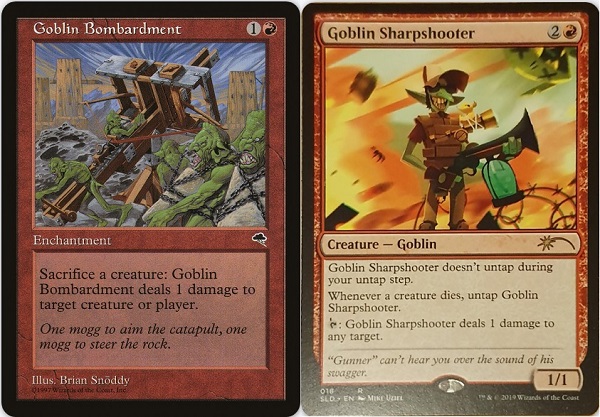 The attack phase is more meaningful in Oathbreaker than in Commander. A starting life total of twenty means a ruckus of goblins can bring down the house before slower strategies ruin the fun. Yes, combo decks can be faster, but a Planeswalker most often needs to stay alive for a turn cycle before an opponent can cast their signature spell and execute their chief strategy. Disrupt them with a pandemonium of goblins. And if they cast a board sweeper, rebuilding will still be possible thanks to Xenagos, the Reveler and your signature spell. Proactive and aggressive strategies are more viable in this casual format.

If you thought Purphoros, God of the Forge was terrifying in Commander, wait until you try him in this deck. Why, even Impact Tremors can knock your opponents off their feet thanks to Empty the Warrens raining down goblin bombs.

Have you ever experienced the joy of casting Goblin Recruiter into Goblin Ringleader? That's legal in Oathbreaker. You can also tutor the goblin you need with Goblin Matron, such as Goblin Trashmaster to destroy something like an Ensnaring Bridge. If you need a sacrifice outlet for death payoffs, you can even target the same artifact multiple times with the triggers all on the stack. Every Oathbreaker deck should have a few cards to kill problem permanents, like Moat, so we also play Decimate.

Skirk Prospector is powerful enough in this deck that we're playing a second one in Phyrexian Altar. We can also get a burst of mana from Runaway Steam-Kin or Brightstone Ritual to enable our goblin storm. That's when we want to cover the board with so many Red men that your opponents will think it's a Santa Claus convention, which happened last weekend in San Francisco.

In Oathbreaker, you attack opposing Planeswalkers about half the time, which is why I'm not automatically including the multiplayer star Grenzo, Havoc Raiser. Goblin Lackey and Warren Instigator also require you hit enemy players, but you're most likely to want to use that ability on earlier turns before you need to start piledriving Planeswalkers. And speaking of, don't underestimate the power of punching players in the face with Goblin Piledriver, Goblin Rabblemaster, or even Foundry Street Denizen.

Krenko, Mob Boss can fill the streets of Ravnica with goblins, but I also will want to combo off with Krenko, Tin Street Kingpin and Mogg Raider. Throw in a death reward or two to make it a blockbuster.

Before I start talking card flavor, I wanted to say one more technical point about the land count. Twenty-two might seem like a high number to Goblin players, especially in a fifty-eight card deck. But keep in mind that in Oathbreaker you always start with two non-land cards in your hand, your locket of Planeswalker and their signature spell. If you draw a few too many lands, you can cast your signature spell an extra time. If you draw too few, you'll never cast your Planeswalker, and everyone at the table will out-pace you. That's why I like to err on the side of more lands, and in this cases we even play two good creature lands in Mutavault and Raging Ravine.

Now for flavor. The card name "mogg" refers to goblins from the plane of Rath. The Evincar, an agent of Phyrexia, bred them for the invasion of Dominaria. These heftier goblins now live there too and might roar in excitement every time Squee detonates himself with a Goblin Grenade. What an inspiration!

Long ago on Dominaria, Pashalik Mons led his Mons's Goblin Raiders in the first Magic set ever, Alpha. That was over twenty-five years ago, but today he can still help you lead your goblins to victory. And by lead to victory I of course mean leading them straight into cannons. Fire away! *BOOOOOOM!*