I have wanted to make a 3D version of Xiahou Dun, the One-Eyed for a long time, but I'm not willing to cut up seven or eight copies of the most expensive legendary creature in existence. The new judge foil version has dropped the price a bit, but it's still above my threshold.

However, I am considering reimagining Xiahou Dun. Instead of being âthe One-Eyed,â how about âThe One Eye?â 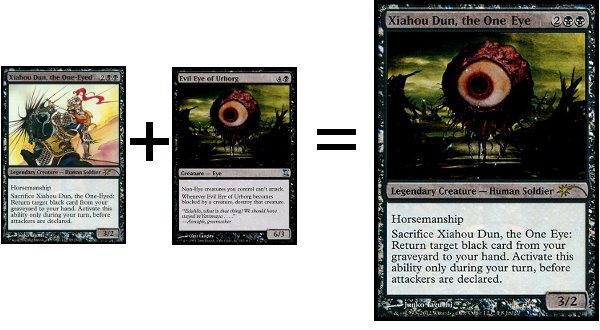 By using a 3D version of Evil Eye of Urborg for the art, I can have a 3D Xiahou Dun that only requires one copy of Xiahou to make!

For others, the threshold is lower, and they don't want to cut up a stack of Kiki-Jiki, Mirror Breaker or Grand Arbiter Augustin IV like I did in previous articles.

These two don't need any reimaginingâjust swap in the art from Soulsworn Jury for Grand Arbiter Augustin IV and any Kamigawa-block Goblin for Kiki-Jiki.

Another reason to make an alternate-art 3D card is to turn a nonlegendary creature whose art you love into the commander for your newest deck. I'm a big fan of Nameless Race, but I have no idea what I'd do with a 3D version. The art always has made me think of a reflection or a twin, so maybe I should swap it in for one of these guys:

The flip side of taking an art you love and finding a card on which it would work is taking a card you love and finding art that will work for it. Sadly, some great cards have art that doesn't work out in 3D very well. Things like fog, flames, smoke, and translucent beams of energy are hard to pull off in 3D but are common elements in Magic art. Finding a new art for that tough card might be the best option.

Other beloved cards just have disappointing art and could benefit from a facelift. Some of these cards have ugly artâthink Rasputin Dreamweaver. Others, like Jaya Ballard, Task Mage, have art that don't match the personalities of the depicted legends.

On the other hand, if you're making a card for the self-described âBiggest Melvin in the world,â the art doesn't matter! You can just black out the art and make a 3D empty frame like I did on this Omnath, Locus of Mana: 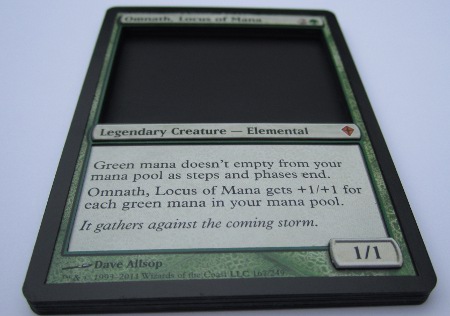 Legendary creatures aren't the only things you might want to stick alternate art on. A couple months ago, I made a token for Penumbra Spider by swapping out the frame on a Shadowmoor Spider. Mike Fairservice makes alternate-art 3D tokens like these:

The first time I ever made an alternate-art card was for one of the Altered Reality Challenges here at GatheringMagic.com. The prompt was to alter a card to be a zombie, werewolf, or vampire. While my favorite concept was The Mimeoplasm altered to be all three creature types, my own entry was a zombified Squee, Goblin Nabob. 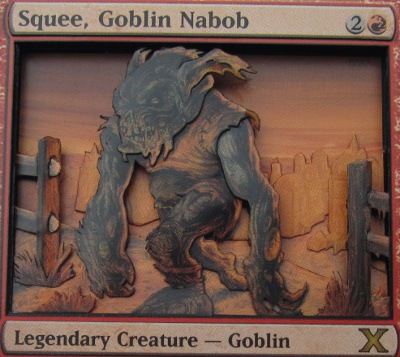 A few of these reasons combined to lead me to make this week's card. I had wanted to make a 3D version of Progenitus for a long time, but the original art for Progenitus is not very good for 3D; there is too much fog and too little contrast. The From the Vaults: Legends version is a bit better, but it's only available in foil, which I prefer not to cut. I also wasn't terribly excited about cutting up a stack of $15 cards.

I decided to swap out the art of Progenitus for that of a different Magic Hydra.

While I've always been a fan of Phytohydra, I didn't think that a Plant Hydra quite fit as replacement art for Progenitus. That was a common problem with most of the artworkâfew of them were impressive enough to fill in for âThe Soul of the World.â Eventually, I settled on the only other multicolored hydra: Apocalypse Hydra.

As I often do, I started out by cutting out the sky from one of the copies of Apocalypse Hydra. 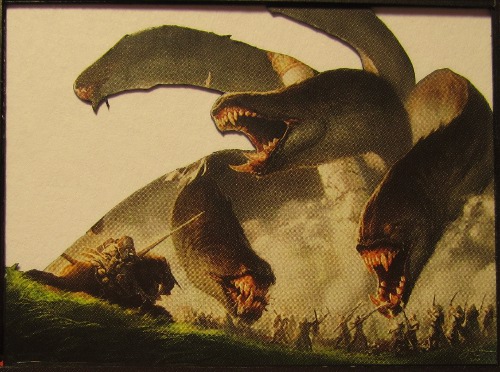 Next, I worked on the farther-forward layers. First I made the grassy hill in the foreground: 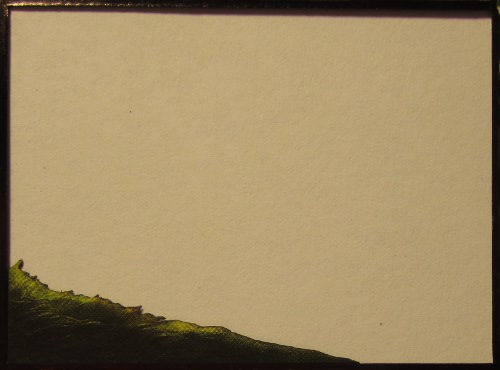 Instead of leaving it flat like that, I cut it away from the frame on the left side, and then curved it back away from the viewer. Then, I cut out two layers to make up the group of soldiers who are about to be torn apart by the beast.

Because the rider on the hill shouldn't be in the same plane as the soldiers, I bent that side of that layer forward so it connected with the bent-back hill from the foreground layer.

I wasn't sure how best to tackle the cloud of dust. I started out by cutting just one layer to make up the whole cloud: 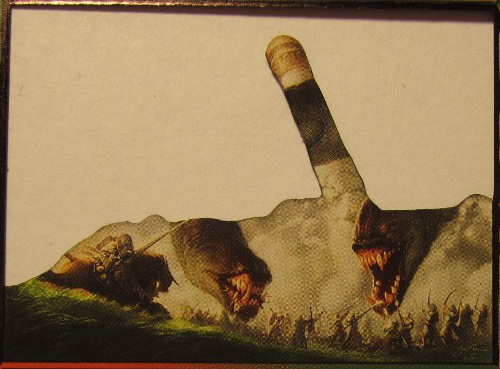 I used my clay-shaping tools to add some ripples and bends to the cloud, but it still looked a bit flatter than I wanted it to, so I added another layer: 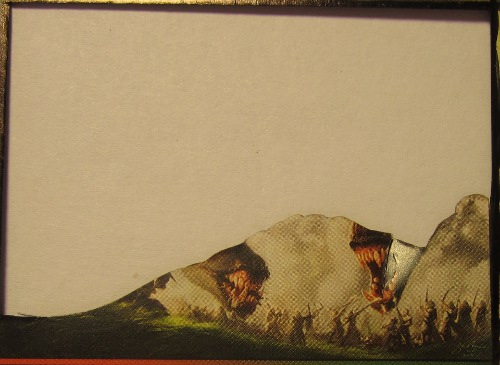 After adding the ripples and bends to the second cloud layer, I was happy with the effect. I moved on to cutting the detail pieces.

After shaping and assembling the heads, the four pieces looked like this:

The last thing to do was change the card's text from Chinese Apocalypse Hydra to English Progenitus. For that, I used two foils: the From the Vaults Progenitus I showed earlier and a random, common, multicolored card. 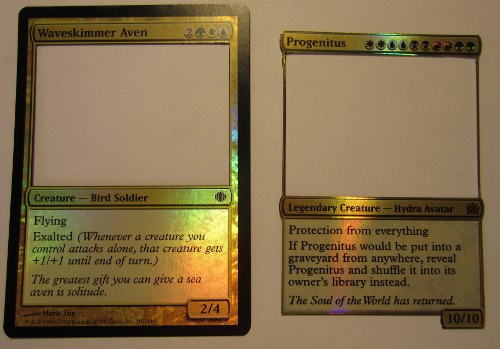 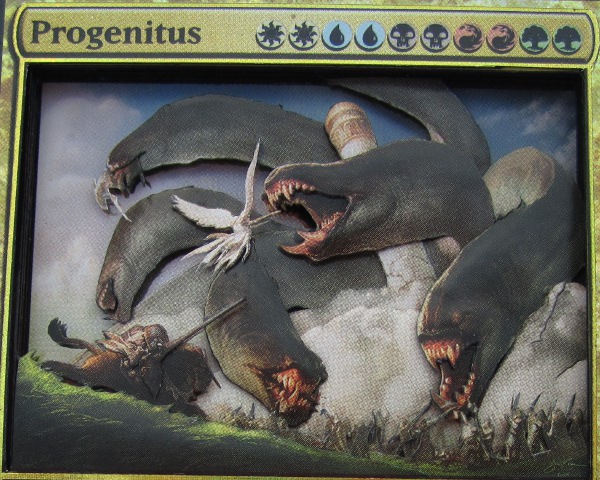 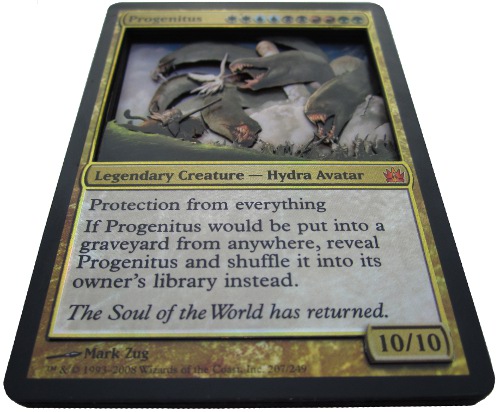 If you've ever made an alternate-art 3D or have a great idea for an art swap, share it in the comments!