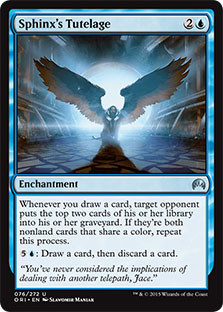 In this experiment, we study under the sphinxâs tutelage to bring the blue dawn and enter the infinite.

Last week, I experimented with a Magic Origins preview, and this week, I want to do another. However, unlike last week, Iâm going to cover an oddball enchantment instead of a mythic and powerful Dragon. Oddball enchantments are a bit more my style.

Sphinxâs Tutelage is like an upgraded Jace's Erasure. Itâs 1 more mana, but it mills for twice as much, which is a big deal. It also has an activated ability that I expect will rarely be activatedâ6 mana is a bit much.

Iâve written about Jace's Erasure before, but that time, we were using the mill effect on ourselves to power up Scrapyard Salvo. Sphinxâs Tutelage doesnât give us that option, so weâll have to embrace the game plan of milling out our opponent.

Whenever You Draw a Card

Sphinxâs Tutelage triggers whenever we draw a card, so that means we want to draw a lot of cards. When I played with Jace's Erasure, my plan was to cycle a lot. This time, however, I decided to go with drawing huge chunks of cards at a time. My first instinct said to build a land-filled deck with Treasure Hunt as my win condition. And then I realized Treasure Hunt doesnât actually let us draw cardsâit just reveals a bunch of cards and then lets us put them into our hand.

My next thought was Enter the Infinite. The thing about Enter the Infinite, though, is that when we cast it, weâll almost inevitably win on our next turn regardless of the win conditions weâve put into our deck. For that reason, Enter the Infinite isnât the type of card I like to build withâit combos with everything, so it just never feels that special.

This time, however, was the exception. Enter the Infinite lets us win with anything on our next turn, but with Sphinxâs Tutelage, Enter the Infinite lets us win before our next turn! Casting it with Sphinxâs Tutelage can mill our opponent for sixty to eighty cards, which should be plenty. As long as our opponent doesnât have a deck full of Eldrazi or other cards with shuffle-your-graveyard-into-your-library clauses, weâll just win the game. (And if youâre worried about Eldrazi and the like, just toss in a copy of Ravenous Trap and hope it isnât on the bottom of your library.)

Okay, so maybe Enter the Infinite is going to be fun. But it isnât exactly easy to cast. Weâll need a backup plan. How about Interpret the Signs? This costs 6 instead of 12, and if we reveal Enter the Infinite, weâll still be milling our opponent for twenty-four cards. Thatâs not quite an instant kill, but itâs a good distance toward ending the game, and weâll have drawn twenty-four cardsâdonât forget about that part. In this case, Interpret the Signs does its best Enter the Infinite impression: Weâll probably win on our next turn (or during the subsequent draw step of our opponent).

Letâs take a look at a few other expensive spells I picked out for Interpreting the Signs. Oh, and before I go too far, I should also mention that weâll have Brainstorms around so we donât have to rely fully on scry to hit our big tutelage triggers.

Draco â This is the classic synergy card with Erratic Explosion. Instead of hitting for 16 damage, though, weâll be milling for thirty-two cards. Oh, and Draco is also a 9/9 with flying, so we have a bit of a backup plan. If we have basic lands of each type, itâll only cost 6 to cast and will have its upkeep-trigger cost reduced to 0. Did I mention weâll be playing domain?

Bringer of the Blue Dawn â As long as weâre in the market for domain cards and expensive things and drawing cards, Bringer of the Blue Dawn is the perfect solution. It costs 9, so itâll mill for eighteen when revealed with Interpret the Signs. Its domain superpower means we can cast it for 5 with the right lands, and its upkeep trigger lets us draw extra cards and mill our opponent for as many as six cards per turn. If you love Bringers and are willing to make some room, try out Bringer of the Black Dawn as well for more of a combo bentâyou wonât be drawing as many cards in your upkeep, but you can find the perfect card for a combo kill.

Treasure Cruise â This costs 8 but can be cast for cheaper, and it is a card-draw effect, which means milling. We canât afford a ton of delve since weâre not milling ourselves, but with all our spells, we should be able to cast a Treasure Cruise or two relatively easily.

Blasphemous Act â I generally like to ignore what my opponent is doing, often to my detriment. If youâre more of an interactive player, you may want more of these and of spells like itâsuch as Dead Dropâbut even I wanted to ensure Iâd have a little bit of threat to my opponents. Like Treasure Cruise, Blasphemous Act has a high cost for Interpret the Signs interaction but can be cast for cheaper.

With all our big spells and with our domain goal, mana-ramp spells just seem natural.

Ravnica rare lands â These are pretty integral to this deck the way Iâm building it. There are a lot of them, and theyâre there to help us reach domain, which is having a basic land of each type on the battlefield for cards such as Bringer of the Blue Dawn and Draco. Well, the Bringer doesnât care about the types of our landsâonly the manaâbut for Draco (and Stratadon if you want to try that one out), the land types will count.

Urban Evolution â This oneâs a Divination and an Explore smooshed together, which means card advantage. And since Divination was already card advantage, we just get more. Playing extra lands is also nice since itâll bring us closer to casting Enter the Infinite and the like.

If you donât have the rare Ravnica lands, just play your Alpha dual lands instead. If you happen to not have those either, feel free to find another way to reach domain, and maybe ditch the Dracos.

If you like sphinxes, tutelage, or mono-blue five-color, give this deck a try.