The beating heart of all things mystical in the world, islands represent mastery of the mind as well as the elements. Long periods of time spent in intense contemplation, walking the beach in mindful quietness, safely removed from the hustle and bustle of everyday lifeâitâs a fitting narrative for those who dwell there. Blue contains some of the most iconic and powerful spells the game has to offer. It is only fitting that the lands associated with these game-changing effects be suitably enigmatic.

Isolation is a constantly recurring theme. Just as the land is cut off by the surrounding waters, so too is the mind that calls such a place home. In order to achieve a transcendent understanding of the nature of reality, one must have time to ponder, to think (many times), to meditate. These lone sanctuaries provide refuge for those who are interested in learning the rules of their world so they may bend and even break them.

Islands are also places of intense natural beauty. Itâs hard to imagine a tropical shore at dusk that doesnât ignite the mind with aesthetic fire. With the horizons clear for the sun and the stars, clouds can be used as the artist desires. Virtually any time of day or night is all but guaranteed to be of exceptional beauty. Itâs so easy to make an island beautifulâ.â.â.

Sometimes, the challenge to creating an engaging, original image is in raising the bar for yourself. As creatives, we come to expect that our work will take a certain amount of effort to make it from start to finish. When the actual expenditure exceeds that expectation, we know weâre working on something really difficult. But when it is far below that expectation, many artists feel something is wrong. These are not people who made it this far in their careers by being content with the easy answer. They need the challenge, and they will seek it out if they have to. There are plenty of ways to take a painting of one of natureâs treasures and bring it to the next level. Here are some of the more popular ways Magic artists have chosen to seek a high level of achievement over the years. 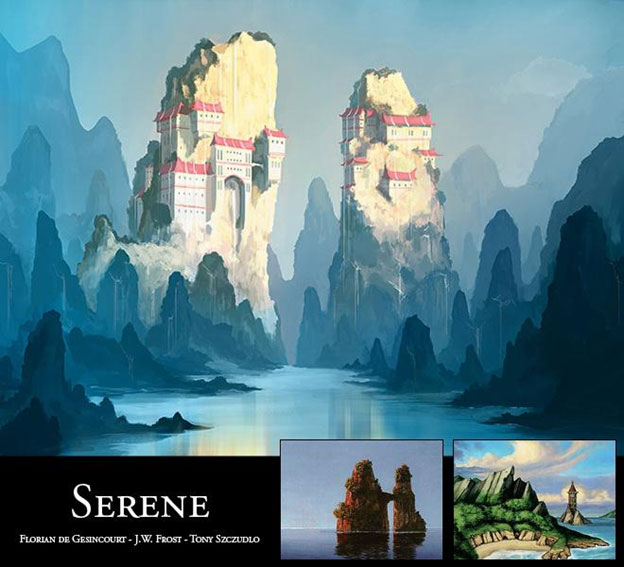 Though the islands from this genre draw a lot of cues from their real-world counterparts, they largely depart from the realistic in favor of the emotional. The contrast between the glassy surface of calm waters and the living landscape is a pleasure to behold. Mist and haze give the painting a wonderful tool to help soften so many of the hard lines usually created by stone and water. Realism takes a back seat to whimsical fantasy. The eye has a lot of forgiveness for rock formations, which gives the artist a generous amount of flex space to create his or her world. By and large, the viewer is okay with that; few are concerned with the feasibility of the beautiful. We believe it because we want to believe it.

Islands from this series have a certain universal appeal to them that puts them at home in any deck. The Taoist, Buddhist, and Shintoist ideals represented by the Jeskai tribe make for a perfect fit. 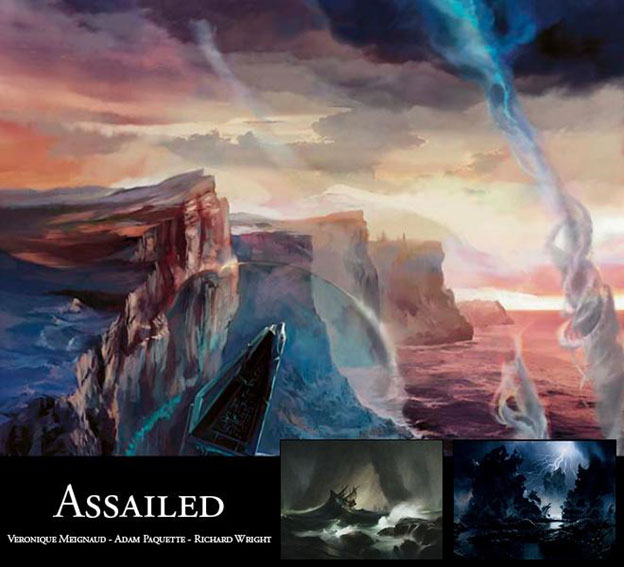 On the other side of the proverbial coin, we find a group of artworks that seem to have been constructed by men and women with a personal vendetta against islands. Sky and land is torn asunder by the might storms not born of this earth. Normally vivid colors give way to silhouette and desaturated hues. The few times the sky is visible through the immense thunderheads that dominate the upper half, it is wild and chaotic. Artists painting in this subject often include a manmade object, to provide not only a narrative, but also a sense of scale. It becomes immediately apparent just how bad things are when you realize the ant-sized spec that is being tossed around like a rag doll is actually a ship. Anyone who has spent time out to sea has that one story of the time he or she found a storm, or, sometimes, of when the storm found him or herâ.â.â.

Given the violent, eruptive nature of the imagery, U/R decks would work very well here. The Izzet color combination is all about the clash of opposites and the thunderous fallout when such massive energy is released without restraint. What better way to cast Electrolyze. 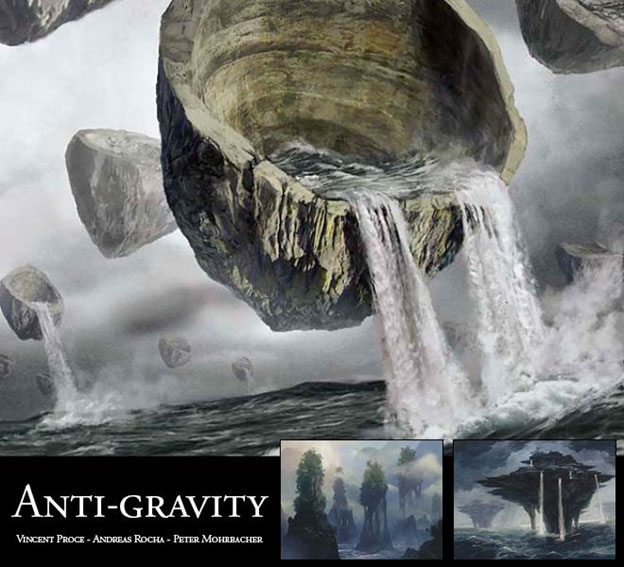 Where the landscapes of the serene islands gently pushed the rules of physics, some of the works in this series outright ignore them. This is a fictional universe after allâthereâs no need to hang onto pesky rules, like gravity, if they work to the detriment of the end product. Though Magic: The Gathering has a very strict set of laws governing the way things work within the bounds of its surreal world, those laws tend to apply mainly to the players rather than the stage itself. Just like the serene lands, we are left to suspend disbelief in favor of the emotional affect. If itâs advantageous for islands to defy gravity, defy they shall. As long as the change is in service of the story, it is a good change. Basic lands are sometimes the first point of contact between the viewer and the narrative. What better way to set the tone for the extraordinary than with a stage that reflects the ideals of that fantasy world?

These are lands that are all about manipulating the rules in service of a great achievement; I can think of no deck more deserving of such status than Omni-Show and infinite-combo decks for Commander. 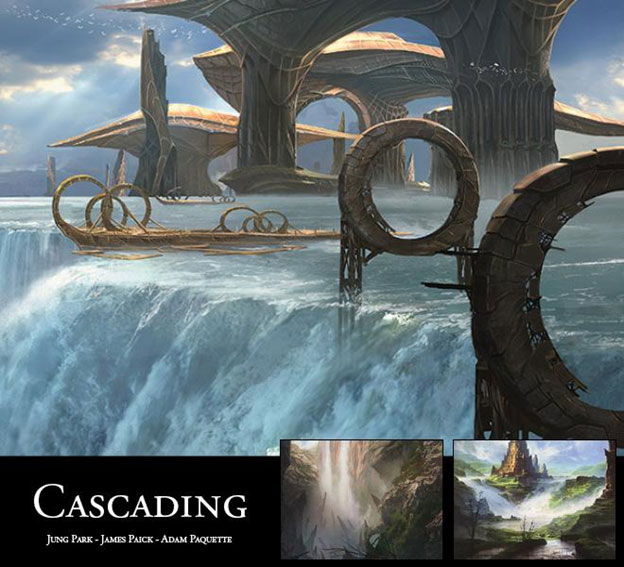 The fact that the land is surrounded by water doesnât mean it has to be placid. Bringing a healthy dose of getup and go to the table, the mobile water lands bring the energy of the storms without the over-the-top violence. In many instances, these waterfalls and rivers interact with manmade structures, such as in Ravnica, Lorwyn, and Tarkir. The vibrancy of motion provides a strong attraction to the eye, a suggestion of fresh, clean, drinkable water. There is often foliage nearby, when permitted, adding to the vitality of piece.

With such a strong connection between blue and green, Simic finds a good home here among the falls. Temur also pulls nicely from this theme, its hulking creatures and larger-than-life humans playing right into the lively energy and kinetic pace. 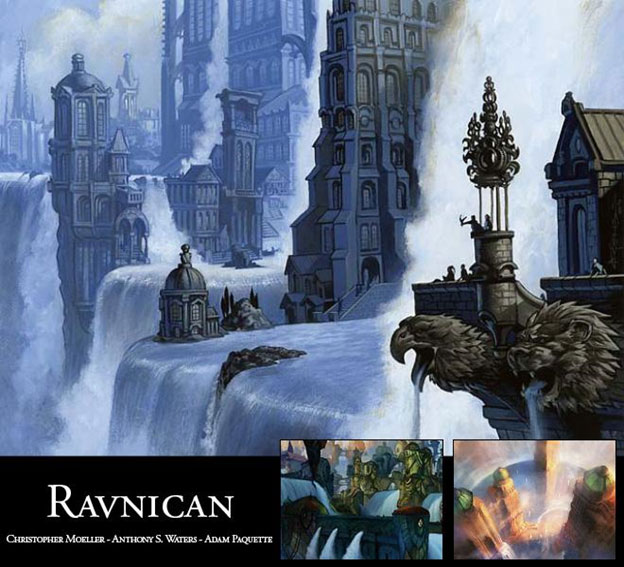 The home of manmade waterfalls, the islands of Ravnica suggest a wholly different take on the subject. Where many of the natural falls might have a single bridge or path to assist the odd traveler, the falls of Ravnica are tightly controlled and heavily ornamented. There is a fierce intellect to the system that contains the water for untold millions. Ducking and dodging in between the structures that contain it, the falls take on whatever shape is deemed appropriate by the unseen hands of the engineers and architects of the plane. Itâs all very purposeful, very measured, in a way that the natural waterfalls are not. The domination of intentional design over the inevitability of the elements gives the islands from this series a sense of victory. Maybe somewhere, on a world impossibly far from our own, man has finally mastered his environmentâor, if not man, some manner of geniusâ.â.â.

This crowning achievement is held in equal regards by Izzet, Azorius, and Simic. All three guilds seek equal dominion over their surroundings, using science, precision, and brute force to attain their respective ends.

In addition to the usual suspects, I included a âvirtualâ panorama. While it is debatable if the multiple croppings were taken from a single piece, laid side-by-side, the islands of Portal create a convincing panoramic image, if not by the strictest definition. I was surprised to see a lack of fully-panoramic island chains divided into multiple land cards, but if nothing else, that leaves room for future possibilities in the ever-expanding world of Magic.

Panoramas are the ultimate collectorâs paradise. Theyâre perfect for Cubes and Commander decks.

When it comes to the eclectic nature of blue, islands are ready to fill any role. Whether youâre fortifying your latest Commander brew with a suite of counter-magic, building that ultimate tribal Merfolk deck, or working your way up to the big leagues with Show and Tell, thereâs an island out there just for you.

Iâd like to remind readers that, due to the laws of supply and demand, premium Islands are going to be inherently more expensive than their landlocked counterparts. Blue is one of the most played colors in the Eternal formats, and there is a massive demand among Commander, Legacy, and Vintage players for the best artwork money can buy. You can realistically expect to pay anywhere from 20% to 50% more per land for some of the super-rare basics out there. For example, as of the writing of this article, a copy of the Guru lands ranged from $140 for a Plains or a Mountain card to a whopping $310 for the Island card from this series. Thatâs something to check in on before you decide to fall in love with a particular artwork in this article.