Readers! Remember how last year (get it, because I'm talking about December 2020?!?! OK, that's the last one, I promise) I spent a lot of time talking about Squirrel Nest/Opposition decks, trying to find the right shell. I tried two different decks in December alone. You probably think I'm a little nutty, probably think I have squirrels on the brain, probably a third thing. You read I have a tattoo of Deranged Hermit on my ribcage [citation needed] and named my kids "Mob" and "Wrangler" (Ok, I actually named my daughter "Wrangler", but it was after the jeans). While I admit I have an affinity for Squirrels since I used to get a ton of value from Deranged Hermit back in the day and with the printing of a Squirrel Commander, it seemed natural that I would sleeve up Nut Collector and Deep Forest Hermit, right? 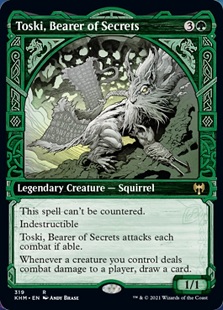 This is a Squirrel and this is a commander, but this is NOT a Squirrel Commander. Like, if you needed a black-bordered card to make your Earl of Squirrel pile legal, good on you, I suppose. However, this is not really a Squirrel Lord. I built a Morophon Squirrel deck, does anyone remember that? Believe me, I'd love and excuse to build a Squirrel deck and this isn't it. Sorry. So, are we done here?

Of course, we're not done here! I'm building around this card, it's happening. Since I'm not doing Squirrel tribal (a strategy the commander kinda leans toward, but not really) because I think that's boring, everyone has done that already and this commander lends itself to other strategies, I'm going to look at what this card reminds me of and build that way. You know what I see when I look at Toski? 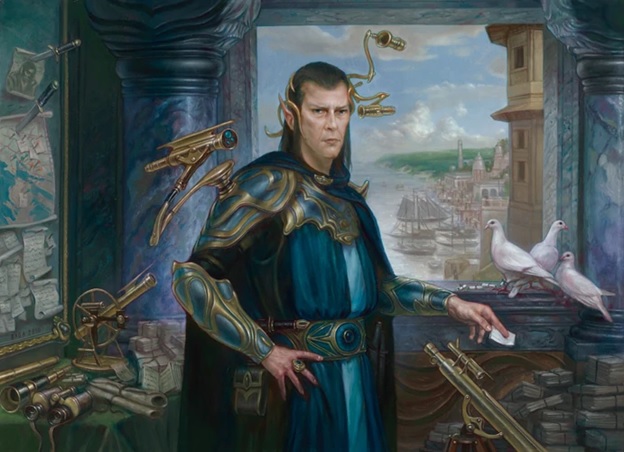 Toski doesn't encourage your opponents to attack each other like Bill Nighy here does, true, but Edric is most often used in "Flying Creature" builds that use cheap cards like Flying Men, Scryb Sprites, and Pteramander to draw a bunch of cards. We can come close to that, because Green has a nonzero number of flying creatures, right? 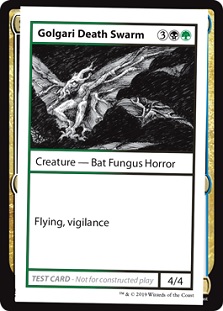 It turns out the well isn't quite as deep as we'd hoped. I started off excited, thinking "Hey, Edric decks run Scryb Sprites, 1 card down, 98 to go" and then I brought up the EDHREC page for Edric fliers and... it's Scryb Sprites. That's the whole list.

I was a little dejected until I asked myself "Hey, myself, why do they need to be fliers?" and I replied to myself "They don't, why do I know that and you don't know that? You're me" and myself said "I was doing a Socratic method thing where I ask you a question that helps you figure the answer out for myself," and I'm not talking to that guy for a while. Point is, they don't need to be fliers. Edric decks use flying creatures because they're hard to block and get through usually. As long as the creatures get through, they can have any ability that gets the job done. We're not building flier tribal; I didn't not build a tribal deck to turn around and build a tribal deck.

Green has some ways to get through in combat that aren't trample, and quite a few cost the 1 mana we are used to paying for Hypnotic Siren or Zephyr Sprite.

You know what else can only be blocked by a creature with flying? A flier. This guy flies, I don't know how else to put it. "But Jason" you're saying "It doesn't have flying because it can't block a creature with flying." Actually, Treetop Scout can't block at all because it's tapped because it just swung at them, got through unblocked, and you drew a card. You're welcome for the card, why are you trying to block fliers, anyway? Arashi that trashy, you have enough non-flying "fliers" to make it 'cane and not lose a single creature. That's not a terrible idea, actually - I could run Squallmonger in this pile...

I don't have a paragraph about it, I just want to let you all know that the next thing I checked on was Horsemanship and if you don't want to drop $200 on a copy of Riding the Dilu Horse or drop 5 mana on a 4/3, this is an empty well.

But there are lots of other ways to get our creatures through, aren't there?

There's this nasty beater that gives opponents fits, and in a Mono-Green deck, affects all of our non-Artifact creatures.

Taunting Elf gets everything else through when you attack a single player, and if you can make it Indestructible, it can do the same turn after turn, taunting blockers and letting you make mad stacks of extra cards.

Do you like the idea of running Forestwalk creatures?

Silhana Ledgewalker reminds me that there is more to Toski that we've ignored up until now. While it's great that Toski is very useful as a 4-mana Enchantment that says "Coastal Piracy is a Green card, now - go whine to Maro about your precious color pie" it also has to attack every turn. This is to remind you that you should be putting equipment and auras on your Indestructible commander because it can kill them by itself. Sure, Toski doesn't have flying or Horsemanship, but Toski DOES have something else - an indomitable will, which is coincidentally the name of a card you're not allowed to play in this deck. Stacking enchantments like Bear Umbra and Equipment like Pennon Blade on Toski could end the game fairly quickly, and being able to throw something nasty on a sneaky beasty like Silhana Ledgewalker can give you a taste of what it's like to play mono-Green Bogles. Pennon Blade is a SUPER clunky card, it would be nice to play Stoneforge Masterwork, but this isn't a Squirrel deck. I am NOT being tempted to steer into Squirrels, as convenient as it would be to be able to play Tribal stuff like Vanquisher's Banner.

We may end up with quite a few Squirrels, however, because if you thought I wasn't running Squirrel Nest and Earthcraft in this deck, you must be new. We can use the combo to make a lot of mana and a lot of creatures depending on the other cards you have out, and we can channel that mana into Helix Pinnacle because that's the kind of thing I do.

So, we have a deck that can go wide and go tall, depending on our needs. We will hamper their ability to wage war against us with the application of cards like Nature's Will and Sword of Feast and Famine. We will generate a ton of mana with cards like Druids' Repository and Cryptolith Rite and we're putting a Deranged Hermit in the deck because it's my deck and I want one in here but it's not a Squirrel deck. Plus, the Squirrel Nest. Two Squirrel cards. Squirrel Wrangler. 3 cards. 3 measly Squirrel cards in my not a Squirrel deck.

This deck looks like it will be a lot of fun. This, as always, is a bit of a hybrid between a few different directions you could lean into depending on what you like.

This could be tuned to being a lot more enchantment-heavy. You could really lean into the Voltron aspect of it and add more and more enchantments to make Toski a combat threat. Trample and Indestructible make Toski hard to block already, but Champion of Lambholt can make it impossible. You could add cards like Helm of the Gods to bug Toski even more or add Trailblazer's Boots to make sure you connect. Feel free to spread the enchantments out onto creatures like Spire Tracer and Silhana Ledgewalker so you don't get blown out by bounce spells if you happen to not have Hexproof on Toski. In general, you can look at what makes Uril, the Miststalker decks tick and copy some of those tricks. I have quite a few Enchantments in here because of course I do, and Ancestral Mask is going to do work. I'd always rather have Wild Growth than Farseek, especially with Arbor Elf in the deck.

You could go to an Elf build fairly easily. A lot of the smaller, hard-to-block creatures are elves and there is obvious tribal synergy. You have a lot of ways to add Elf Tokens and you can add more. Squirrel tribal is not well supported but Elf tribal is and this deck, with a lot of modification, could be an Elf tribal deck. You would have a lot of small creatures but also a lot of mana with cards like Priest of Titania and Elvish Archdruid on top of your regular shenanigans with Cryptolith Rite and such. You'll draw a ton of extra cards and find exactly what you need (Craterhoof) to win, any of your win conditions (Craterhoof!) will do, ranging from a big creature-based finisher (CRATERHOOF) to something like Craterhoof Behemoth. Season of Growth is very good in a build like this.

If you want to go Squirrel tribal, you're close. Add in all of the Instants and Sorceries that make Squirrel tokens, the few creatures that do that which I cut and Coat of Arms and you've got a decent start. I prefer staying away, personally, and I'm much happier with what I concocted, but if what you want is to get a little nutty, the tools are there.

That does it for me, thanks for joining me for the first article of 2021. Until next time!