I donât often have a clear path of how I come up with article ideas, but I was driving home with my wife Emily, and we heard this song:

It got me wondering if there are any Magic artworks of a rider on a steel horse. It immediately gave me an image of Magic in the 1980s. It was vivid.

The game would be different, but frankly, how much? Since Wizards of the Coast bought out TSR and gained Dungeons & Dragons and all the old properties, could it have gone the other way around or simultaneously? Iâm a fan of what-if scenarios because they weed out terrible ideas and things to clearly avoid in the near future. That said, a few nuggets of truth keep manifesting themselves as others, and I keep examining Magic under a magnifying glass.

I ever have to remember that most of Magicâs player base currently was born in the late 1990s, and the other experience of the 1980s they have is from VH1âs âI Love the 80sâ program. In short:

Among a variety of other things, a lack of foresight was pretty common in the 1980s. Thank God we didnât have a nuclear war; letâs end with that.

There are revivals from time to time of 1980s somethings, but since it was so dominant by pop culture, itâs hard for any fashion or technology to reinvent itself and be not only taken seriously, but also be actually relevant. For example, menâs fashion changed in the mid-2000s, when Thom Browne shrunken suits were the rage. Now âclothes that fit and flatter menâ have become the norm, basically killing most of the over the top examples of the 1980s. 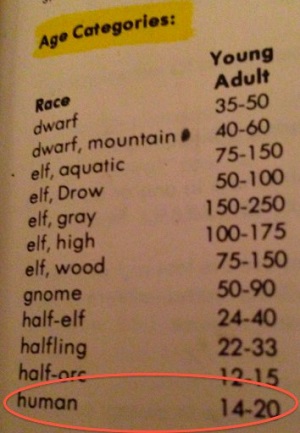 Copyright Wizards of the Coast,via AD&D first-edition DM Guide
Letâs just discuss how different planeswalkers would be in 1983. First of all, our shared nostalgic love of Urza would probably be a shared face-palm moment for the first set of five planeswalkers. Today, our beloved neowalkers started out without a strong interlacing storyline. It took years for Liliana and Garruk to finally cross paths. From the onset, they would mix their storylines immediately. In the 1980s, if you had large personalities in any brand, of course they have to interact. All storylines would mix, love stories would be alluded to, at best, and dating would be a part of the game. I can hear the Polish Tamales fans already. God knows awkward teenage innuendo would be everywhere.

Fundamental changes would be had that we take a bit for granted now. In 2013, or hell, even in 1993, efforts to ânot alwaysâ use a trope have been in place. Jump back ten years, and my god is everything the same. Every hero, every villain, and all storylines seem so similar in their goals: rule the world and/or multiverse. Anti-heroes, such as most swamp-aligned anything, would be a tough sell. It isnât relatable.

A sidekick would clearly be needed, and comic relief is required. (Perhaps it could be a younger âBaby Jace,â like Scrappy Doo.) Cheesy doesnât even begin to describe the atrocious storylines that would emerge.

Also, all planeswalkers would be teenagers. The 1980s loved youth, and why wouldnât the central-branded characters all be fourteen to twenty? Have you seen early AD&D campaigns? The base rate at which you start is, of course, age fourteen, despite puberty still being in full effect. God knows any adventurerâor any planeswalker for that matterâwould know how to combat other planar creatures and their acne. The storyline writes itself.

All of their names would change, too. Liliana would be Rachel, Garruk would be Greg, Chandra would be Cindy, Jace would be Jason, and Ajani would be Aaron. On the flipside of being utterly unrelatable, their names would be âsuper-futured-up,â like Jadzia or Zandera. (I so need a 1980s planeswalker alteration now!) Despite their âtime-shiftedâ names, forward or backward, the colors of Magic wouldâve probably define their personalities more with a few changes. Everything would have a reason for them doing so. Why is Liliana heartless? Well, sheâs consumed by black magic, and she doesnât have a father in the picture. Chandra is an orphan, and that explains her outbursts. Jace is bullied and attacks the only thing he can to fight back: their minds. Ajaniâs pride is his weakness. Garrukâs trample-like attitude hurts othersâ feelings, and he feels guilt. I miss 1980s tropes so much because they were just everywhere upon first looking at a kidsâ program. It took anime a while to break into the U.S., and sans-Internet, alternative viewpoints were hard to find outside of The Watchmen graphic novel and utterly unavailable to rural America, where I grew up.

Iâd like to think the early sets such as Fallen Empires and the base sets would be similar. After all, the first few years of a decade are basically carbon copies of the tail end of the last cultural segment. Mallrats the movie came out in 1995. Remove the grunge clothing inspired by Nirvana in 1994, and itâs basically any 1980s movie.

Add in a dance craze, oh, say, Walk like an Egyptian, and you would immediately have an Egyptian set, not unlike an AD&D module made with haste and, frankly, being forgettable. (Actually, I take that back. Silly cards come out of kitsch sets. Look at Library of Alexandria.) Side note: Also, everyone knows that Arabian Nights was based on a scene from Neil Gaimanâs Sandman, right? Good.

We probably would have revisited a bunch of planes already. Having a resonant base is vital. The Weatherlight Saga lasted for years! Imagine if planes were destroyed and rebuilt multiple timesâsuch as with Dragonball or Mirrodinâagain and again. It would make our planes have a lengthier history but would be atrocious for new players if not handled delicately.

Copyright Marvel, via Giantbomb.com
Can you imagine the number of public service announcements?

In the 1980s, there were hundreds of public service announcements (PSAs) of pop-culture-related things to convince kids not to use drugs. The war on drugs was basically a TV campaign that didnât do shit. Itâs hard to find a societal problem from a distance. I can imagine now the campaign:

Government money plus flavor texts equals â.â.â.â let that sink in for you.

There would invariably be a comic book or full campaign about Chandra using âdrugsâ or some sort of magical âenchantmentâ that mimics drugs exactly.

Iâve discussed Magic TV shows in the past, and I could obviously see a cartoon being made in the 80s with even marginal support from a company.

I like some endorsed products. When Dairy Queen adds Girl Scout cookie flavors to Blizzards, America wins. Iâve been beating the drum that Magic should make figurines, coffee table art books, and other products in short supply in remote places. That, dear reader, is Magic extending into products that we, the consumers, want to have. Take our current Magic brand, dilute it by a thousand, and thatâs the early 1980s for a gaming brand.

Star Wars already had two smashing hits in 1977 and 1980, with merchandising frickinâ everywhere. There were millions of dollars being made, and by 1983, Toys âRâ Us was ground zero for lunchboxes, sleeping bags, stuffed animals and other crap. Now, Iâd love plushies made of some things, but everyone knows, due to Magicâs immense number of creature types, itâd be a dragon, an elf, an angel, a demon, and some type of merfolk, but probably a sea monster. Why would I say that? Itâs easy. An audience wouldâve wanted it, and frankly, Magic tried it already with art, and it was um, good. Kind of. They chose great artists at least! See: 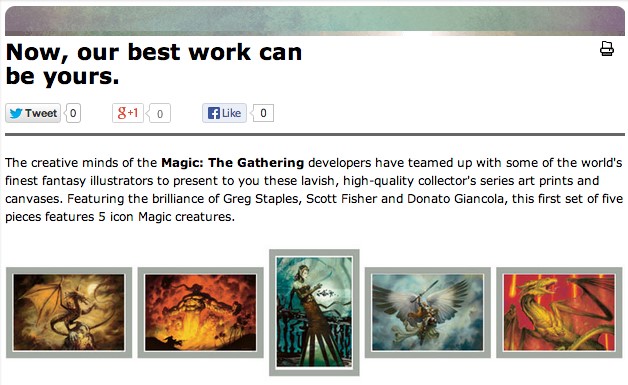 Add Ten Years to Everything

You think Legacy is expensive to play now? Imagine in ten years. Dual lands being silly-expensive happened less than ten years ago. I came back to Magic in Future Sight, and dual lands were still quite plentiful. They werenât cheap, but playing a U/B deck wouldnât set you back the cost of a new computer, as it would now. 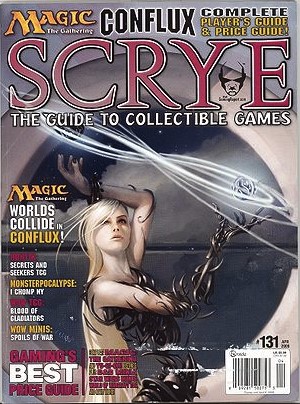 Original art would be absolutely silly-expensive considering a stock market crash in 1987, the end of the 2000s, and the most recent Great Recession. Art has value, and whenever the U.S. dollar drops, art flies up in price because itâs less liquid and generally considered an investment on the higher ends of things. Right now, an Alpha original artwork, independent of who made it or actual quality, has a minimum price of $3,000. (We can discuss why that is so offline; itâd take a full column by itself.) In short, more time means people want it to appreciate in valueâand in importance, too, if you will. By having more time in the market, art would invariably have more exhibitions, and the more a âgoodâ work is shownâsay a Donato Giancolaâthe more valuable it becomes. We are just approaching that point as a general consensus in the Sci-Fi/Fantasy art community. Museums are slow to change, and the Geek Chic movement hasnât impacted them much. It now has had a few new forays and will see many more soon. Trust me on that. If we had ten extra years, it would be widely known and weâd probably have another master artist in our ranks showing at the Tate, for example. In time, things will get there.

Beckett and Scrye wouldâve been titans to financial traders like my boy Ryan Bushard in the 1980s. A weekly periodical? On Magic!? Itâs the most up-to-date card-price listing there is! I can see the traders quoting it now like a Dragonlance novel.

Can you imagine the potential for fixing prices or insider info being leaked back then? We didnât have the Internet to quickly disseminate that a Godbook was leaked and rabble rouse. Hell, IRC and MSN messenger would be utter years away. Iâm sure a lot of people would become wealthy from it, and at least one instance would hit the Wall Street Journal not only for investment purposes, but also for fraud, insider trading, and speculation targets leaking.

I left a lot of holes of things that would be different. I hope you see what I did there.

Let me know what else you would imagine. Comment below or talk back to us on Twitter using the hash tag #80sMTG.

Iâll start us off:

Next week is my annual Magic art holiday buying guide. There will be something for everyone looking for a Magic item, there will be some time-sensitive items, too. If thatâs relevant to your interests, Iâd be refreshing GatheringMagic.com at 10:59 P.M. CST and be on Twitter from 10:30 P.M. to 11:30 P.M. CSTâ.â.â.âYouâll see why.