Login
0 Item
Advanced Search
Sign In
Create Account
"I mean, who gets nothing but Islands on a single Keep Watch for three?"

"And that's after casting Harvest Season and killing off a Veteran Explorer! This deck must be cursed!"

"Considering that we're spending at least two days a week playing Magic," you explain, "the odds were bound to get skewed at some point."

"Yes, well, you've got eight creatures in play," Mari points out, "and you're hitting me with a lifelinked Questing Beast!"

"Not yet this turn I haven't," CJ says. "I need to clear the ground first. Territorial Allosaurus with kicker?"

"It's a 5/5, and the kicker makes it fight something. Your Ensouled Scimitar isn't a creature, right?

"I haven't activated it yet," Mari says, nodding.

"I'll have it fight your Embodiment of Insight, then. That's a 4/4, so it should go down easy."

"I'll cast Befuddle on your Allosaurus in response," Mari says. "That'll bring it down to a 1/5, and it'll let my Embodiment survive. And I'll draw a card that had better not be another land."

"I knew you had that in your hand," CJ says, smiling. "You're not stealing another game from me today."

"I see that you learned something from your previous game," you remark.

CJ doesn't seem to be giving it more than a fleeting thought, though. "I'll cast Serra's Boon now," he says, "to kill your Marang River Prowler."

"You mean you drew a counterspell?"

"No, I mean that my Marang River Prowler's a 5/2. It gets a bonus from Grand Architect, remember?"

You shrug. "At least that means that your Questing Beast is going to be able to outrace it again, CJ," you say.

"Speaking of which," CJ says, "here comes the attack. I guess you're not blocking with the Embodiment of Insight just yet."

"I thought I was at eighteen."

"You gained one more life from Soul Warden when you cast that Allosaurus," Mari says.

"I wouldn't sit back just yet, CJ," you say. "You know how Mari operates."

"To be fair," CJ says. "I'm not sure what she could do here. Unless she's got a way to off my Questing Beast, I think I'm cruising to the win right now."

Mari gives you a raised eyebrow. You're looking over her shoulder just enough to see that she's drawn an Infinite Reflection from the Befuddle. In her hands, the combo piece might as well be a dangerous weapon.

"Any word from the twins?" she asks you.

"Cécile's been on emails to their family," you say. "They're still stuck wherever they are, so we're going to be house-sitting for a little while longer. Apart from some really late instructions for us not to touch their drink mix collection, they've said that the whole house is at our disposal."

"Did they tell us where to find the map?" CJ asks, laughing. "I still get lost finding the front door."

Mari draws a Deprive and shows you her two-card hand. "That's a relief," she says. "If I had drawn any more lands, I would have broken a vase or something."

"So is that enough for you to win?" you ask. 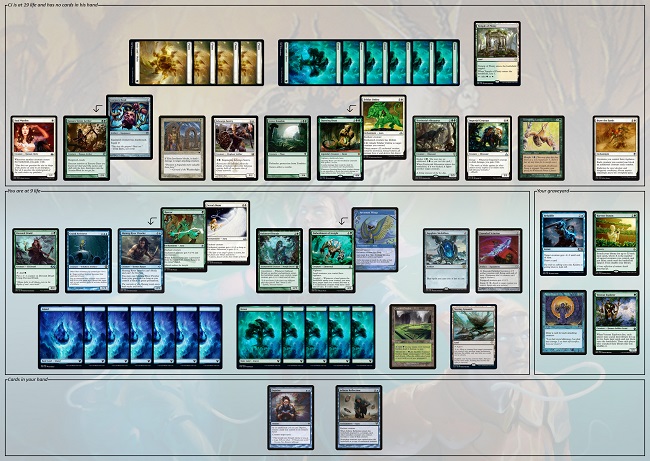 CJ is at 19 life and has no cards in his hand. He has the following cards in play:

Instead, if you think you've got a great solution, you can send your solution to puzzles@gatheringmagic.com with the subject line "Puzzle - A Thousand Pieces" by 11:59 P.M. EST on Monday, May 4, 2020. We'll include the best ones in next week's article along with the next puzzle!

"The math dictates how you're going to win today," Greg Dreher writes. "You have 3 evasive damage from Impaler Shrike, as long as Enemy of Enlightenment can be dealt with, which means that 13 damage has to come from Ram Through. You can get Tree of Redemption to 14 power, so you'll need Cécile to have a creature with 1 toughness.

"My first thought was to use both Silvergill Douser and an extra activation of Merfolk Thaumaturgist on Enemy of Enlightenment to get it to 1 toughness, but couldn't manage to make that work (needing either a way to discard a card in hand or having exactly 1 merfolk/faerie when the Douser ability resolves.) That's because you can't have Enemy of Enlightenment reach 0 toughness, because of this ruling for Ram Through:

If either creature is an illegal target as Ram Through tries to resolve, the creature you control won't deal damage to any creature or player.

"The trickiest thing about this puzzle is manipulating Enemy of Enlightenment with your card total," Michael Feldman continues. "Realizing that you can't kill it before Ram Through resolves eventually leads to the realization that you'll need Coral Trickster's morphing ability to tap Enemy of Enlightenment (instead of untapping one of your other Merfolk)."

With this approach in mind, we come to Russell Jones' solution:

You can also wait until you sacrifice your Coral Trickster before you activate Silvergill Douser; this gets you to about the same result.

That said, there's also a solution to this puzzle that relies on a more complex interpretation of the rules. "This is a puzzle with some serious red herrings," Jonah Comstock writes, "but what we ultimately need for the last point of damage is a trick with layers that those of us who played during Innistrad might remember (and those of us who didn't can find in the Tree's Gatherer rulings):