Login
0 Item
Advanced Search
Sign In
Create Account
CJ steps into the room and waves his arms around. "It's a wetsuit!" he says.

You raise an eyebrow. "Yeah, I would have thought that from the snorkel and flippers you're wearing. Now turn around."

CJ obliges, a little too eagerly for your taste. "I think they must have stuffed, like, everything in that storage closet. You think they have an opera suit in my size?"

"When I told you to turn around, what I really meant was for you to get out of here. You're burning the image into my brain right now."

CJ flops back into the bathroom, and you turn back to your game with Mari. "Where were we?" you ask.

"I just searched up an Asha's Favor," Mari says.

"Oh yeah, with your Totem-Guide Hartebeest. What are you putting it on?"

"I'll keep it straightforward and put it on my Ammit Eternal. Then I'll attack with it, unless you're doing anything else."

"Nothing from my side," you say.

Mari pushes her Ammit Eternal forward, and then pauses. "You do realize that that wasn't a wetsuit, right?"

"I know that that wasn't a wetsuit. Why do you think I'm trying to wipe the thought from my mind?"

"Oh good. I thought it was just me. Any plays?"

You glance at your Sewn-Eye Drake and decide to take a chance. "I'll cast Altar's Reap now," you say, "sacrificing my Grasping Scoundrel."

You pull the top two cards of your library into your hand: Serrated Scorpion and Dredge the Mire. "No instants," you say, sadly.

"Can't get everything you want," Mari says.

"And that means I'll take the four damage."

Now it's Mari's turn to raise an eyebrow. "Are you sure? You'll be at two life."

"I'll get another turn to figure that out anyway."

"Okay," Mari says, removing the counter from her Ammit. "It's your turn."

"You guys absolutely need to try this!" Cécile says, leaning against the doorway.

You look up. "That's definitely not your best look," you point out.

"It's an Arnold Schwarzenegger Halloween costume! Get to dah choppah!"

"And now that's burned into my brain," Mari says.

"I mean, this thing's probably bigger than a lot of storage units! CJ and I are finding things that are dated as far back as the seventies! Come on - there are a few things that would look really good on you both!"

You and Mari glance at each other. "I'm neither here nor there when it comes to looking through other peoples' dirty laundry," Mari says.

As she leaves, you add a Searing Blaze to your hand. "So," you say, "how eager are we to pick through their stuff?" 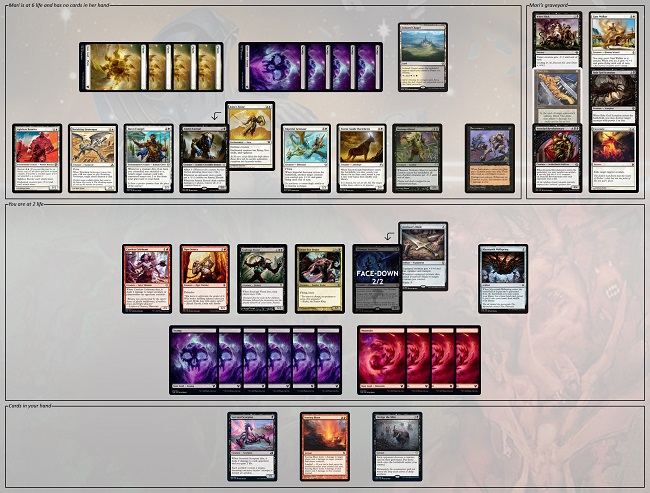 You have not yet played a land this turn. You still have a substantial number of cards remaining in your library, including a number of basic Swamps and Mountains. However, you know neither the identities nor the order of those cards.

Mari is at 6 life and has no cards in her hand. She has the following cards in play:

Mari has the following cards in her graveyard:

Instead, if you think you've got a great solution, you can send your solution to puzzles@gatheringmagic.com with the subject line "Puzzle - Dumpster Dive" by 11:59 P.M. EST on Monday, May 11, 2020. We'll include the best ones in next week's article along with the next puzzle!

"This was tough one," Hyman Rosen writes. "I liked the idea of using multiple copies of Centaur Garden, although I wasn't positive that this was the right approach. But I couldn't make it work until I had a flash of insight that equipping Ensouled Scimitar to Devoted Druid could net a lot of mana. Even so, managing the details was still very intricate, such as getting and keeping threshold:

Notably, the above approach will require you to animate Ensouled Scimitar after Devoted Druid dies. This is because turning an Equipment into a creature will immediately cause it to become unattached from its wielder, which would be bad for a Druid that's heavily-laden with -1/-1 counters.

Because your Auras are entering the battlefield multiple times, however, an alternative solution is available. This one takes advantage of Oakheart Dryads' ability for significant bonuses, as David Arnold writes: