The recent release of Jumpstart gave us a new way to play Magic. In this Limited format you don't worry about drafting. You aren't forced to stare down at your Sealed pool, head in hands, asking, "Why me?" Instead you shuffle two packs of twenty cards together to create a new deck. A few riffles will be enough to spark your ignition, and you're full speed ahead to playing on your kitchen table.

Jumpstart packs have themes such as Vampires, Wizards, or even Archeology. I love tribal synergies, and I knew I wanted to explore the format by creating my own packs. Like Cube, you can cultivate your own Jumpstart experience. Invite your friends to take the leap with you directly into gameplay designed in part by you.

My plan is to create four new packs each week. They may be based around a single theme, if it is deep enough. That's the case with Thallids. These fungi were printed in the first tribal set, Fallen Empires; they returned to flourish in Dominaria, and they introduced to the game our beloved saproling tokens. 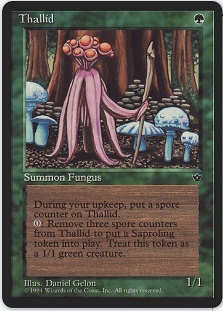 I never got the chance to make a Thallids deck in my Oathbreaker articles. Though the Oathbreaker format still excites me, last week I felt like I peaked with this absurd vehicle deck. Also, I wanted to capitalize on the opportunity for fungal synergies in the new Jumpstart format. If you want a specific type of content here, customers can and should let CoostuffInc know.

In the meantime, toss up a fistful of glittering spore confetti, and let's crack open our first Jumpstart Thallid pack.

Each of today's packs will feature a different rare and a variation on the theme of fungal growth. We're starting with the origin of thallids. During the Ice Age on Dominaria, the elves were starving. Thelon of Havenwood engineered a food source out of mushrooms, saving his people.

Thelon's splashed ability can be activated twice with Vivid Grove, or even more if you're lucky enough to have Jumpstart'ed with a Black pack. But don't worry; Thelon of Havenwood is great even without Golgari mana. His people were more than grateful, feasting on delicious fungus, as represented on the card Elvish Farmer. In gratitude, they even formed the Thelonite Order, which expanded beyond the Elven Fortress to include other species like humans and nantuko.

Imagine, if you will, sitting at an elven banquet, the night lit by gently glowing spores and the air tinkling with laughter. The nantuko opposite you passes you pear gravy with their long mantis arms. You slather it over your saproling wafers and savor the food's crispy richness.

But all is not well. You hear a commotion, and the walls of the greenhouse shatter. The thallids Thelon created burst forth, sentient and now fighting for their lives. Soon their saprolings are not the only thing being devoured.

The thallids would outgrow their elven masters and force the once proud race into hiding. The elves were one of the Fallen Empires. You can reenact that on the battlefield, should an opponent open Elves.

In this Thallid pack, a few fungal lords should give you the explosive growth you need to clinch victory. Thelon of Havenwood is the most powerful. The opponent will need to kill him or be clobbered by your ravenous fungus. If they do, his mushroom children can get him back from the graveyard with Fungal Rebirth. The other lords, Sporoloth Ancient

and Sporesower Thallid can give you the bounty of saproling tokens you need to win. You can also protect these key fungus cards with Savage Thallid.

Do surprise your opponent with your Strength in Numbers. Sometimes a bit of mold can hide a whole wall of rot. With our ability to creature more creatures than our opponent, any effect that counts all of them will be additionally strong. For balance reasons, I didn't include a card like Overrun in this pack. This next one has the more reasonable Overcome.

This Thallid pack doesn't include Thelon of Havenwood himself but one of his adherents, Thelonite Hermit. This recluse lived an age later during Time Spiral, another apocalypse in which thallids continued to flourish.

Rather than synergies between thallids, this deck focuses on creating as many saprolings as possible then pumping them. One of the key cards is Thallid Shell-Dweller, which will block and form a wall around your secret garden while it grows lush with fungus. This pack contains two copies of it, which is permissible in Jumpstart. Each pack includes a single rare and about three uncommons. Some packs also have a mythic, but we'll save those for another time. Thallids have no need of them, thanks to some mythical rares.

As much as you may enjoy a plate full of mushrooms, Mycoloth loves them more. After devouring them our rare becomes huge and creates even more saprolings. You should know this isn't exactly cannibalism. As the flavor text describes on Thallid Omnivore, saprolings are another crop planted with spores and harvested by sentient fungus.

Granted, saprolings are a lively bunch themselves. I imagine them as the dancing mushrooms in Fantasia. Perhaps they even giggle as you eat them. Maybe they taste like mint.

You'll certainly relish sacrificing them in this pack, either to your rare or to Psychotrope Thallid. And killing this fungus only encourages them, as can be seen in Rot Shambler. This pack also has another card-draw spell in Fungal Plots. It could be this booster is more powerful than the others. I am doing my best to balance them with each other and with the original packs from Jumpstart. It will be easier to do this once I have my hands on them and am able to test; I hope you'll forgive me jumping the gun with this first article. Like Thelon, I am experimenting with things I do not fully understand. Also like him, I regret nothing.

Our fourth and final pack will contain a sacrifice theme, with Elvish Farmer, but our goal will be different. This time we want to savor our saproling feasts to the fullest, represented in game with life gain.

Gaining life will protect you from fliers swooping over the defenses of your fungal garden. It will give you the time to grow a critical mass of fungus then overwhelm your opponent in a moist tide of scampering saprolings. As humble as the card appears, Magnify can help deal the last critical points, doubling the power of your saprolings.

Now that we've explored all four packs, you may be wondering at the absence of Sprout Swarm. That card dominated Future Sight Limited. Though it is very flavorful, you should be mindful of its ability to break a format. If you wish to try it, I would treat it as a rare and substitute it for Elvish Farmer.

Tendershoot Dryad is another very powerful card, on the level of Mycoloth but less budget. You can certainly include it in one of your packs if you own one. And speaking of, do comment with your fungal suggestions and requests for future Jumpstart pack themes.