One of the best ways to enjoy the Cube Draft format for all its worth is to become well acquainted with numerous types of Drafts. One of my favorites is Winchester Draft. In the comments section of my last article, a reader named IncrediSteve introduced me to a format Iâd never heard of before: Grid Draft. So, I decided to call up a friend, draft my Cube a few times, and compare Grid to Winchester.

Before I jump into the comparison, letâs take a brief look at the two formats weâre discussing: 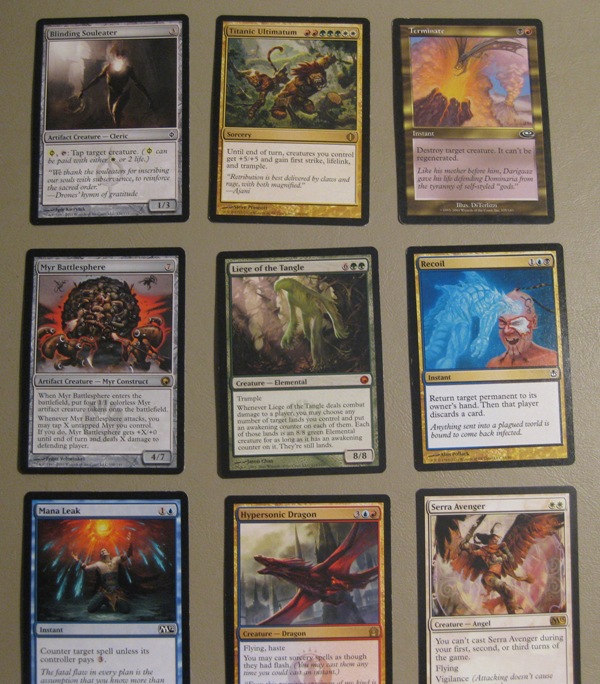 An example of a Grid Draft. Which set of three cards would you pick?

I first learned about this format via Tom LaPilleâs article on DailyMTG. 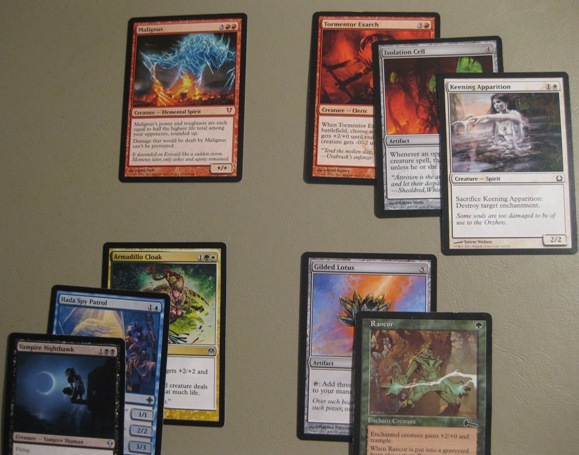 An example of a Winchester Draft after the first two picks. Which stack of cards would you choose?

Strengths and Weaknesses of Grid Draft

My thanks again to IncrediSteve for the introduction to Grid Draft. After some searching online, I also found this explanation on Cube-Draft.Blogspot.com.

Grid Draft has a lot of strengths:

This format also has a couple of weaknesses, though:

Strengths and Weaknesses of Winchester Draft

Like Grid Draft, this format has a few strengths:

Though it takes a few minutes longer than a Grid Draft, Winchester can easily be done in twenty minutes, which is a lot less time than most other formats.

This format has a couple of weaknesses, too:

Thoughts to Chew on Before Your Next Draft

After playing and comparing these two formats a number of times, the first thing Iâve realized is: Thereâs value in picking the Draft format based on your opponent.

If youâre playing with an opponent that knows the game inside and out, you may want to stick with Winchester or something even harder. Youâll have a better shot at hosing the player, and youâre more likely to give him or her a Draft challenge the player will appreciate.

Contrariwise, if youâre playing with someone who is fairly new to the game, stick with Grid Draft. You will be able to explain things such as archetypes, Draft strategies, and other nuances more easily. It should also be more fun for the player because he or she will be more confident in his or her picks.

The second takeaway is: Decide what you want to know about your Cube, and pick your Draft format accordingly.

If you just added twenty or more cards to your Cube, I highly suggest going with Grid Draft a few times. Most of them will appear during the Draft, and youâll quickly see which deck archetypes are supported (or not) within your Cube. Youâre also more likely to see if your Cube is out of balance in any way (i.e. having too many cards of a certain color, too little of a certain color grouping, too many or too little of certain mana costs, etc.). Winchester Draft will reveal this information, too, but much more slowly.

The last lesson this comparison has taught me is one I think I knew intuitively because itâs woven into the very fabric of the game: Magic is more fun when you keep mixing things up.

It had been a while since my playgroup had tried something new. When we started playing the Grid Draft format, I could feel the excitement around the table. This was something fresh, and it was great fun!

Whatâs Your Next Draft Going to Be?

I hope you enjoyed this little comparison between Winchester and Grid Drafts. I think itâs good for Cube Draft players to think through the pros and cons of formats like this so we can ensure weâre creating the most enjoyable Draft experiences possible with whoever is sitting around the table with us.

Thanks again to IncrediSteve for telling me about Grid Draft. I also owe a debt of thanks to my good friend Brad who helped me develop these pros and cons over a few different Draft nights.