A user submitted to i09âs Rob Bricken: What is the nerdiest fandom on the hierarchy of nerds?

There's something about CCGs that breeds kind of an insularity of nerdiness. Maybe because people can be somewhat into comics, buy the occasional collectible, or maybe check out a well-known anime series on Netflix, but with CCGs, you're sort of required to be passionate. You have to learn the rules; if you want to have any chance of competing, you have to have certain cards; and to obtain those, you have to spend a certain amount of money. With CCGs, you're either all-in or you probably shouldn't bother, and the people who tend to go all-in often seem to do so to the exclusion of most everything else. And those who play them do seem to be the most obsessed nerds, the ones whom other nerds can least understand or relate to, and that's why they end up at the bottom.

I feel that I talk about Magic not being Geek-chic on a regular basis, but itâs relevant here again. On one edge of the spectrum, players hide their hobby, unwilling to even leave an opened Pucatrade envelope out on the kitchen table, which moves us into geek shame. This was covered extensively by our own Natasha Lewis Harrington here.

The converse player base plays in parks, in libraries, orâas a coworker and I didâin a hotel bar while at a conference in Phoenix to enjoy the gameâin public. People can see you there. Andrew Rogers covered "Taking Magic to Work", as did I with "Magic" at Work for ways to popularize Magic, sure, but also as ways to make the game accessible. Some people are taking it out of stinky basements and into, well, visibility. Itâs slow, but itâs happening. That isnât to say this is a universal problem. If youâre in Seattle, you see Magic quite a lot compared to if youâre in Kansas City.

After reading this i09 article, of an opinion in a major geek news outlet that was uniformly agreed upon as being fundamentally true, it feels as though our community has hit a point at which the problem not only needs to be fixed, but our game cannot progress without such a fix. I didnât see much of a blip at all on Twitterâbarely a peep. If a movie is in our near future and one of the most popular gaming websites poses that a collectible card game (CCG) like Magic has a insularity problemâand many commenters agree that itâs unapproachableâany movie or TV show is doomed to fail. Utterly.

Magic and Connecting and You

I spend a lot of time reading these young professional articles online claiming that weak ties between people are the real movers and shakers of society. The axiom, âItâs not what you know, itâs who you know,â is a very real phenomenon in any job market. I donât care if youâre in a rural village or a Sim City megalopolis, bypassing barriers for success by simply knowing a friend of a friend seems beneficial. Granted, we donât need to write about it every two to three months, but some folks just canât figure it out, so I get it. Itâs like the Top 10 âmost favorite MTG artâ articles. Yes, we get it; you like a shorter list of art. Good for you.

Going back to our issue we have in front of us, I think itâd be smart to show how, in my small way, I do three things every week outside my job to prevent MTG insularity, moving us from bottom-of-the-totem-pole nerds to a celebrated fandom: I write an article for Gathering Magic, I volunteer in some variety, and I have an early-morning coffee with someone.

The final point is what is hammered home: Magic simply does not do wellâwe donât connect enough outside the game. 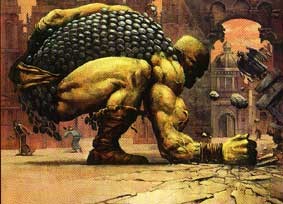 We can play nearly every week in our local gaming stores yet never be invited to a barbecue or even ask what the person across from you does for a living. Too often, unless youâre preparing for a large tournament and in need of playtesting, the extent of friendship really only lives on a Facebook group page thatâs terribly moderated and inside a store that smells like Funyuns. There is a crap load of discussion to be had on the deck that delving into what youâll be naming your kid isnât exactly paragraph two in conversation.

This has to change.

Connecting Is the New Networking

I wonât use the word networking as something we all should be doing because the word networking needs to die in a fire. In a nutshell, you go to a networking event to pass out business cards for yourself to gain a future thing. There are a hundred bland articles telling you the importance of doing this socially awkward thing that âmagicallyâ is important. Thanks, collegiate career centerâgreat vague advice. Networking is a means to an end. Itâs someone helping youâ.â.â.âfor some reason that isnât clear.

Connecting is a one-on-one meeting with someone, asking him or her about himself or herself and then passing things relevant to his or her life to him or her in the future. Connecting is beginning a mutually-beneficial relationship, business or otherwise, in which it makes sense for the two of you to know each other, and sometime down the line, invariably, youâll become useful in some capacity to each other. Maybe thatâs a poor way to describe friendship, but we canât literally be âfriendsâ with two hundred or more people. We can be colleagues, acquaintances, and connections though. Worst-case scenario, there is no connection, but this loose tie will help someone else, which helps your connection.

Think of a Magic employee like our former editor Trick Jarrett. He meets a lot of people at events and tries to keep in contact with everyone, but if theyâve only met digitally, or someone just wanted him as a referral for a job at Wizards, how strong is that tie? Would someone like that ask for a referral? A recommendation? A way to bypass a step of HR?

We, as a gaming subculture, donât connect. We network, and even then, we donât do it all that well. Iâm allegedly connected to a lot of people on LinkedIn in the gaming world, but can I ask one of them to forward me to one of his or her contacts? Can I be totally sure that person will?

While asking a fellow player to lunch, especially a teenager, it could become super-weird. Social media is a great way to start, and it breaks the barriers of our insular CCG nature. Iâd love to have more happy hours with Drafts and Cubes, and some stores are connected to pubs, but itâs a rarity. For example, I donât know many Warhammer 40k players, but I know a Commander player who has an army, and we keep in touch from time to time over a Facebook message. (That and Minnesota eight-month winters really damper fall and spring barbecues!)

The little things matter, for example:

I want to get you in touch with Frank. Heâs one of my gaming buddies and is just finishing up law school. Heâs looking in the bio ethics field, and while I know you work in research, I figured, well, maybe youâd meet up with him to learn about your companyâs summer associate programs or someone in your dept. Heâs a smart guy; youâll like him. Frank will be following up with you soon.

Jim is a colleague of mine, and we sat on a volunteer board together. Heâs good people and is looking forward to hearing from you. Iâd e-mail him quickâhis schedule will book up fast if you want to meet for a coffee in the morning. Lunch will be harder, but itâs worth a shot.

We will be able to break this perception, this wall where Magic doesnât interact with other fandoms. We arenât the nerd kid in the basement only. Itâs something to fix with community organizing at the store level. Then, we can start finding commonalities in products, events, conventions, and more. (P.S. Magic Con: I have no idea why this doesnât exist yet.) We canât make every player shower or be not awkward or learn social cues or dumb down our verbiageâthat isnât possible. Life isnât a game in which you can find the net deck. Put in time to make your group, our game, more inclusive. Lady Planeswalkers Society is a great exampleâyou start by getting to know your own group, and you then make more groups. We then branch out big. Thatâll come later.

P.S. I was on the Heavy Meta podcast. Talked art. Wasnât the worst thing ever.

P.P.S. Iâm tabulating the MTG charity info. There are some really eye-opening results!

P.P.P.S. Alpha Original Artworksâif you see them, let me know!