Hello folks! I hope you are having a great day today!

Consider the state of Commander finances. What is it like? Exactly! It's filled with many hits and misses, with very few cards in between.

Commander's cost can be a little depressing when you think about the money it can take to sink into some of the better cards for the format.

Here we have The First Sliver, which is good in any Sliver deck, as well as strong at leading one as a Commander. But right now? You need to spend around thirty dollars to pick one up. The same is roughly true of Prismatic Vista (I think the Vista was printed poorly at rare and should have been an uncommon. It's merely a Terramorphic Expanse or Evolving Wilds that puts the basic into play untapped and thus costs you a life - it's more like those than the pain fetches that get duels)

But you know what? Lots of folks don't have the ability to pay thirty dollars for one card for their Commander deck. I don't either! I get it.

That's why this series is so important to me. What if I told you that you could make a Commander deck right now for less than $32.65? Each of my budget builds must come in under the previous one, and now that we are at 48 decks, the previous one clocked in at fewer than $33.00 dollars, and thus, we must build with the cost of decks in mind. I had previously seen many "budget" decks on-line clocking in at $100 or more that were, in no way shape or form, budget. I had lived without jobs multiple times in mu adult life. I know what a budget deck really is, and three digits ain't it.

Thus my series was born. 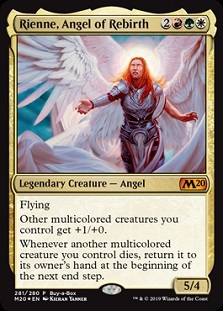 First, I wanted to do Rienne, Angel of Rebirth from Core Set 2020. But as she is the buy-a-box promo, she's not really locked in with a price, and may take a while to drop. Then I thought of two Boros spell-based leaders at the same time:

Both of these are under 2 bucks and could lead my build. Lots of Feather builds are out there! But I think a budget build edition of one might be pretty cool. Firesong and Sunspeaker are the initial buy-a-box promo that was a new card, and have dropped to $1.99 here. I think it might be fun to take the forgotten Spells Matters duo and make them hum.

Due to the popularity of Feather builds, many

cards have spiked on the secondary market right now, such as Sunforger, that's now 7 dollars for any of it's various printings. And cards like this that are good for Feather are also amazing for Firesong and Sunspeaker too.

Let's take this on as a challenge, given the love for Feather right now.

Let's talk about our leaders:

This is Warleader's Helix, which is very cheap on the secondary market. If you cast it while you control your Commander, then it gains lifelink and you will deal three damage somewhere. That means this one spell will do the following four things - Deal 4 damage. Gain 4 life. Deal 3 damage. Gain 4 life. Total - 7 damage dealt to one or two targets, and 8 life gained, for one spell cast. That's a strong effect, and I want to emphasize burn that has both colors, because even bad burn in this context creates a strong powerhouse of passion.

(Note that Lightning Helix is $2, and will be hard for this budget)

There some engines out there that I want to learn on as well, as we'll obviously be spell-heavy.

The first are the obvious duo of Guttersnipe and Young Pyromancer. Both have a long history of being awesome. The next is a little sneakier, as it only triggers when your spells deal damage, not from triggers. But we know what this is. This is a burn deck. And when you do, you get two hasted tokens that can smash immediately. I really look forward to casting a burn spell, clearing the way, and swinging with the newly made dorks and this for 7 damage at least.

Speaking of engines, here are two more! The first is another damage trigger. Note that the Firedancer is a little more limited, the spell needs to deal damage to an opponent to trigger it. But if you do? You can dole out a lot of pain to their dork too for free! If you need to pop a dork, you can get the player too. This also stacks incredibly well with your leader. Should you control both with your Warleader's Helix, and target your foe with the Helix's damage, you are now dealing 11 damage instead of 7.

The Examplars are a bulk mythic that's worth very little on the secondary market right now. But all of the cast triggers that your above engines have, this Human Monk will trigger too. Tapping a creature for free while killing and opening up a defense is great, and I suspect you'll use the first effect the most. First strike and lifelink isn't bad though, and I would not be ashamed to use it, but the tapping the ideal choice, especially against multiple opponents where you would have multiple tap targets.

To be fair, I adore Soul-Scar Mage here, and was surprised by its lack in other builds. When building one of these budget builds, I'll do a lot of research for places like EDHREC.com and Tappedout to see what folks are playing, to get a feel for the field. This isn't even in any of the EDHREC builds at all. There are cards like Anya, Merciless Angel that have less synergy than this thing, and I was shocked that it wasn't listed, as it's such as perfect fit. All of the burns you are throwing at people's dorks is lingering in the form of -1/-1 counters. That means everything from your burn spells to your leader's triggers and more. It's just perfect here, and prowess is fun as well, right? Right!

I'll highlight other cards not on other lists, like Solar Blaze and Searing Meditation that are very strong indeed later too!

We also have some powerful sweeping spells that are nasty with Firesong and Sunspeaker:

Not only will Solar Blaze suddenly get lifelink so you'll gain an epic amount of life, but it also keeps your leader around, and will deal a bonus three damage somewhere, so you can finish off a damaged creature you need to kill, or punch a face for three damage. Deafening Clarion may not be as nasty, but it's still a strong option for your decks. Both of them will sweep much of the board and put you into a dominating position immediately.

I don't know if you noticed, but this is not just a burn deck, but a life-gain one as well.

Therefore, I wanted to include some life-gain engines too, like Searing Meditation, and again, was shocked that it wasn't an obvious and common addition to our leader on EDHREC.com and other sites. In order to trigger your leader, you need to gain life from a White spell, so you are already running loads of life-gain spells. In order to trigger your leader for life gain, you need a Red spell that deals damage, so you are gaining loads of life from your burn. Firesong and Sunspeaker are unique among Commanders as they are the only leaders that create both a burn and a life-gain deck. Searing Mediation is the perfect twin as it does both! You can finished off a burned dork or use this as a kill condition overtime or even to Shock a planeswalker into submission. It's a great card...

...and it ain't the only one either, as we need to draw some cards. Lots of cards. Red and White aren't exactly swimming in card drawing, so effects like Dawn of Hope and Well of Lost Dreams will help a lot to do so. Also note that the Dawn of Hope is great as it's a winning condition maker of tokens, and a source of life gain as they have lifelink. You are going to love both here!

This feels like a fun place to put a few more winning conditions among my life-gain triggers as well.

Don't ignore the fact that this is a life-gain deck too!

I don't know if you were paying attention or not, but Jaya Ballard has dropped to $1.75 despite the fact that she's an in-Standard mythic planeswalker who's pretty good. That makes her a strong addition to my budget brew, Her +1 can help you cast those goodies, and the rest is solid as well. Note that her Venerated Firemage is arguably better, but cheaper. It increases damage from things like Firesong and Sunspeaker's trigger among other things. I also managed to fit The Wanderer here, as I enjoy how she'll protect us from things like my own mass damage effects of Magmaquake and such. She also will exile threats too, which is nice. And due to the proliferation of planeswalkers right now, I didn't spend even $2.50 on these three cards. (They were 1.75, 0.25, and 0.35 respectively, for $2.35 total).

Note that Approach of the Second Sun can win you the game. Because it provides an alternate method for winning, it gives you another path to victory that you can use if the rest of your game is disrupted.

All right, enough flirting. Here's my budget build for you!

Now please note that there will always be a caveat here. The price of cards may shift a little from when I built this deck to when it was edited to when it was published, to when you read it. For example, the costs of the planeswalkers I talked about earlier may have shifted. But that's okay! That's the point - there's always going to be changes and shifts in these decks and articles, just like many cards that Feather liked leapt up. But there will always be budget options.

Don't get so focused on expensive cards like Doubling Season that you ignore the vast majority of cards that cheap.

For example, I was also looking at Aetherflux Reservoir, Balefire Liege, Gisela, Blade of Goldnight, Monastery Mentor, and Archangel of Thune. These would all be great, but, they cost a lot of money, an some like Monastery Mentor just keep on rising due to tournament play. But there will always be other options!

What did you think of my build? Anything in here surprise you or that you think I missed? Let me know! Thanks for reading!

P.S. - I am thinking about powering out my next two BC builds pretty quickly so I get to 50. Any ideas or thoughts about something you'd like to see?

If you enjoyed today's Boros themed deck, great! Here are the first 47 Budget Commander Options for your wallet-friendly happiness and joy: